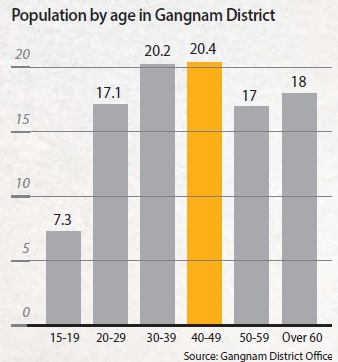 Those now in their early 40s, often referred as young 40s, used to be called the trendy Generation X in the 1990s. Since how they spent their 20s has had an impact on their lives into their 40s, the JoongAng Ilbo has made a symbolic function with the variable X to show how the then-young generation, which was one of the first generations in Korea to accept cultural trends from overseas as the country opened up, suffered from the first-ever economic crisis in the late 1990s, influenced the political scene, and helped shape the current landscape in Korea.

As of 2014, those in their 40s are estimated to number over 8.5 million and have the largest population of any age bracket in Korea. They drive political trends, and form the country’s financial backbone, filling top positions in leading industries.

The JoongAng Ilbo surveyed 95 people in their 40s living in southern Seoul’s Gangnam and Seocho districts to find out more about these cultural powerhouses.

After reviewing the survey results, it has been shown that for those in their 40s the theory that people living in southern Seoul are mostly conservative does not apply. When asked about their political interests, 38.7 percent said they are conservative while 35.5 percent said they are liberal. When asked if they support any particular political party, almost half of them answered that they don’t have any affiliation. 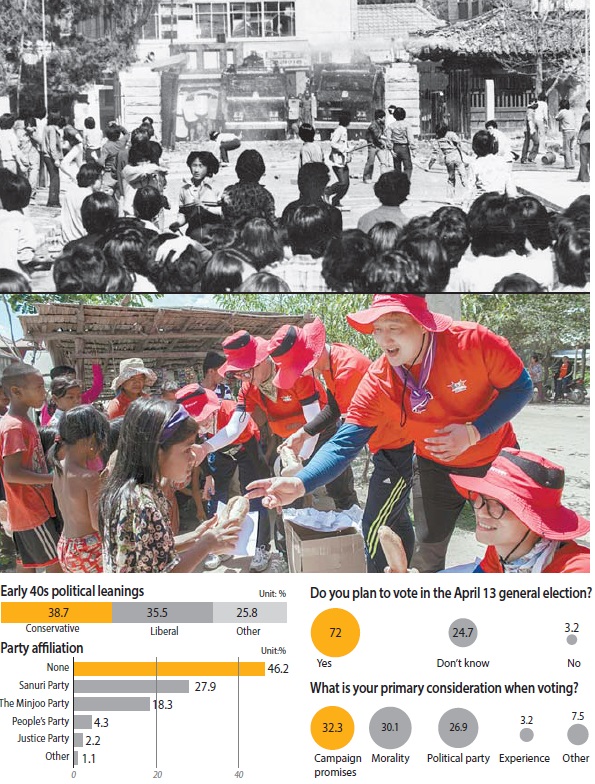 “Since each party doesn’t have a particularly clear identity, I cannot have the name of a party to work as a standard for me when it comes to casting a vote,” said businessman Kim of Bangbae-dong.

However, this doesn’t mean that they are not sensitive to political or social issues. Local experts find the reasons for their indifference toward the political parties but sensitivity toward the actual issues in the situation they grew up in. They witnessed the democratic movement in the 1980s, and when they were out on their own in their 20s and 30s, they had to go through the critical financial crisis of the late 1990s and the change of political power from a conservative party to a liberal one. Due to such changes, they pay more attention to social issues and respond actively.

Instead of analyzing political issues based on black-and-white theories, they tend to look for more practical and reasonable solutions.

“Young 40s tend to hope that what they consider reasonable to be kept in the political arena, and tend to vote for a political party or a leader who seems to continue developing democracy and implementing a better social welfare system,” said Kim Yong-seob, author of “Life Trend 2016.”

Liberals in the affluent parts of southern Seoul, even though they are often condemned for being hypocrites for having a lot but also caring about those in need, still pay attention to not polarizing the society further and support basic human rights.

“After I have worked in a club that helps protect human rights, I have continuously paid attention to the socially underprivileged people and stray animals,” said 41-year-old professional worker Yoon of Banpo-dong.

“Our generation is different and there are many who volunteer or donate to be helpful to society.”

Kim also added that such new characteristics shown among those in their 40s can inspire society to make positive changes.

“Politicians have not fought much on policies so far in elections, but young 40s are very sensitive to how detailed policies politicians bring forth,” Kim said.

“If the next generation, who are currently in their 20s and 30s, get influenced by this trend, the political scene can become much different.”

Unlike those in their 40s in the past, many people in their 40s today show less interest in investing and increasing their assets, although they believe they are saving up a good amount of money. 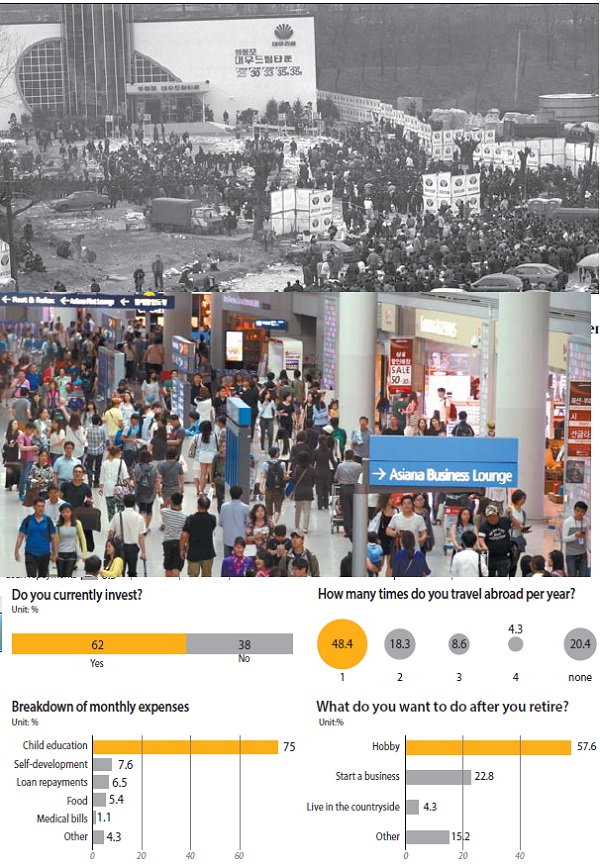 About 62 percent of those surveyed answered that they are currently investing and put about 2 million won a month on average aside. However, the money goes to either savings accounts or insurance, which is more about preparing for an emergency than increasing wealth.

Many of those in their 40s in Gangnam say they don’t invest much because of the uncertain economic sentiment these days.

“The best thing to do in the times like this where there is so much fluctuation is not make any investments,” said 44-year-old homemaker Lee of Apgujeong-dong. “That is at least the way not to lose anything.”

It was possible for their parents’ generation to grow their assets in a short amount of time, since Gangnam District was actually developed in the last few decades. Some even joked that the housing prices were going up two-fold overnight. However, there is no such trend happening now.

“I don’t see any investment option that looks likely to give [stable returns],” said 44-year-old businessman Yang of Dogok-dong. “Since I don’t need any big sum of money anytime soon, I’m going to wait until I find something that assures me.”

They also are a bit more skeptical about owning a place to live. Half of those who answered the survey said they don’t own the place they live in right now, and 38.9 percent of those who are renting homes said they don’t have plans to purchase the place they live in now. That is partly because many own a place elsewhere outside of Seoul, such as in Seongnam or Goyang, Gyeonggi, and temporarily move to Gangnam area for their children’s education.

Also, how they spend their money has changed. While their parents generation valued saving, those in their 40s now spend on themselves.

“My child is important but I’m as important as the child and my husband agrees,” said 43-year-old homemaker Ji of Yeoksam-dong, who does Pilates more than three times a week. “We both feel that the level of satisfaction with life goes up as we [manage] our daily lives better.”

In fact, 78.5 percent of those surveyed said they have hobbies such as playing golf, horseback riding, photography, car racing, water sports, snowboarding or cooking. There are also many who enjoy traveling overseas, as 80 percent of them answered they go abroad at least once a year.

The desire to travel continues as they fantasize about their retirement. Among those in their 40s living in Gangnam surveyed, 43 percent answered that they will retire within 10 years. About 33 percent of respondents projected that they will need somewhere between 2 million and 3 million won a month, and 27.5 percent said 3 million to 4 million won a month. Instead of coming up with detailed financial plan for after retirement, many think about having more relaxing time, different from the routines they have right now.

“I have been studying and working since my 20s. I was never free,” said 43-year-old office worker Im. “I save 5 million won a month extra so that I can spend more time travelling and have an easygoing life with my husband.”

Those in their 40s value their social connections as much as their family. They make friends with people who they can share their hobbies with. Some friends are from school, but many they meet through the Internet or other forms of advanced information technology.

Considering areas near Apgujeong Station and Gangnam Station were the major hotspots for gatherings in the 1990s for 20-somethings, many used to visit the area three or four times a week to go to popular cafes. One of the most popular choices of sweets was parfaits, which have layers of fruit, cereal and ice cream. 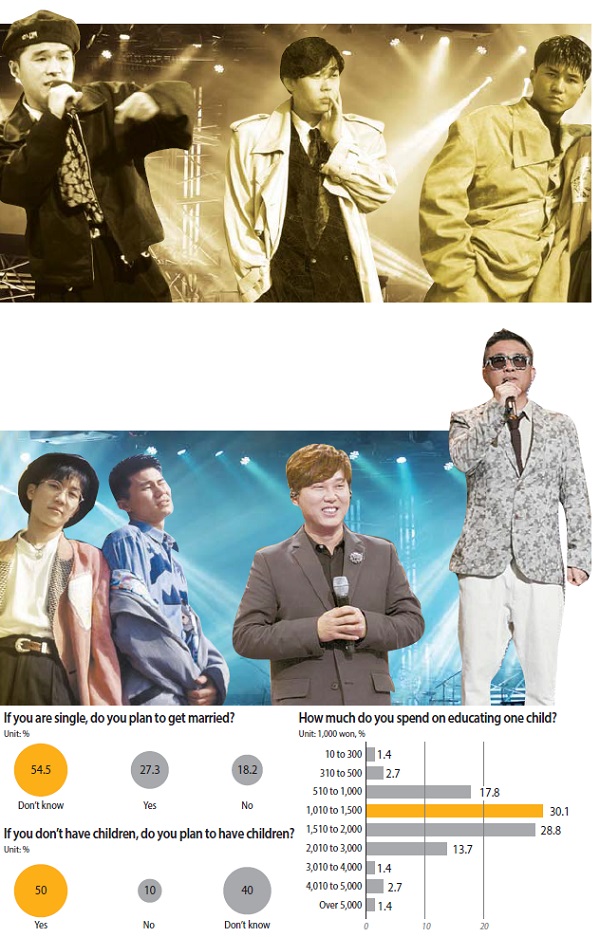 They were the ones who started the fandom trend in Korea, cheering for singers like Shin Seung-hoon and Seo Tai-ji. And even though they are not in their 20s anymore, they don’t consider themselves slow at picking up new trends.

“We are different from our parents when they were 40, both in looks and ideas,” said 43-year-old office worker Kim Jin-hyeong of Cheongdam-dong.

“Thanks to digital technology, it has now become much easier to have access to not only what’s hot in Korea but what’s trendy overseas, so we can’t stay away from the cutting-edge trends just because we are getting old.”

At the heart of the comebacks of so many ’90s celebrities in recent years is also those young 40s.

Broadcaster MBC really stoked a sense of nostalgia for older Korean pop songs through its entertainment show “Saturday, Saturday is a Singer” by bringing all the popular singers and groups from the 1990s up on stage. Recently, the popular “Reply” drama series also brought back memories from the 1990s.

The period was the golden era for Korea in terms of the growth of pop culture. Back then, popular singers sold around 2 million copies per album.

“The 1990s was the renaissance period for pop culture,” said cultural critic Jung Duk-hyun, adding that idol singers, ballad singers and dance groups were all highly popular at the time.

Many other critics say that reviving the previous era is only possible because those in their 40s who used to be the center of ’90s culture are now at the center of all industries. In other words, those who make content now and those who consume content are all in their 40s.

Such behavior has contributed to changing views on family. While many consider marriage and having children as essential, young 40s nowadays think they have the option to do those or not. Almost 12 percent of those who answered the survey said they are single, and they are all under the age of 46. Only 27.3 percent among those said they have plans to get married, and the rest either doesn’t have plans or don’t know.