There’s a new battleground in the price war between major retailers and e-commerce giants: diapers. 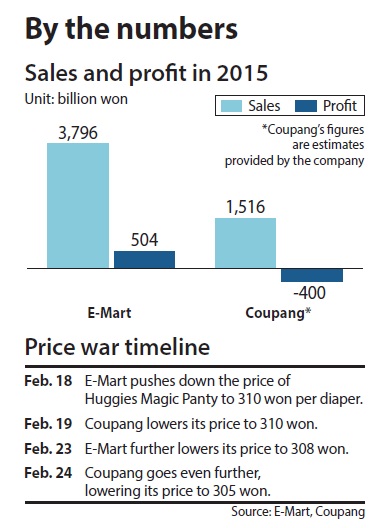 E-Mart, the country’s top discount supermarket chain, fired the first salvo last month by announcing it would lower the prices of its diapers to match those offered by online malls and mobile-focused e-commerce giants like Coupang.

“We used to compare the prices of our goods with other supermarket chains,” said Lee Gap-su, CEO of E-Mart, “But we will expand the scope of comparison to include all retail channels to offer more competitive prices.”

In line with the efforts, the chain will conduct a price comparison once a week with six retailers on select items. The six retailers consist of mobile-oriented Coupang, WeMakePrice and TMON and online-focused GS Shop, CJ Mall and Hyundai Hmall.

The retail chain’s moves reflect the evolving retail landscape, where traditional big supermarkets are losing out to newer e-commerce platforms.

The platforms are typically able to offer the lowest prices by sacrificing their profit margins. Coupang, WeMakePrice and TMON - the three leading mobile shipping platforms - are currently saddled with operating losses in the tens of billions of won.

But the move has drawn an increasing number of consumers from brick-and-mortar stores, as evidenced by Coupang’s record-setting number of mobile transactions reported last year.

Frequent customers of discount chains are moving to their online competitors because digital shopping is not only cheaper but also oftentimes more convenient.

Items most commonly purchased online include household goods like water bottles and tissues, as well as baby products like diapers. Since the items are daily necessities, many consumers opt to buy large quantities through e-commerce platforms to free themselves from having to schlep around a bunch of bulky goods.

E-Mart’s decision to wage this latest battle indicates its intention to win back old customers following a 26 percent year-on-year decrease in diaper sales for 2015.

Coupang, however, isn’t going down without a fight.

E-Mart reloaded on Feb. 23 by further lowering the price to 308 won, only to see Coupang return fire with a price tag of 305 won.

WeMakePrice entered the fray that same day by slashing its own prices to 305 won.

But diapers are only the beginning, considering that E-Mart has declared its intentions to expand its price-cutting strategy to more product categories in coming months.

The source said the measure is driven by the group’s vice chairman, Chung Yong-jin.

“[Chung] stressed that Coupang has taken away customers, especially women in their 20s and 30s, by leveraging lower prices made possible by the losses taken on by the company,” the source said. “He demanded we bring back younger consumers in their 20s and 30s by selecting certain products and providing the lowest possible prices.”

Coupang remains confident in its ability to stay ahead of the competition.

“E-Mart said that they conduct a price survey once a week, but we do the comparison on a daily basis,” a source at Coupang said.

“Along with our low prices, customers are satisfied with the combination of a mobile-friendly user interface and kind and fast delivery.”

Coupang, the top mobile e-commerce player, is currently considering expanding its same-day delivery service to all products directly managed by the company.

While E-Mart and Coupang are fighting for diaper-price supremacy, other retailers are focusing on other goods.

Lotte Mart announced it will offer the cheapest powdered baby formula last month, while WeMakePrice also opened a separate section on its platform to provide cheaper deals on daily necessities.