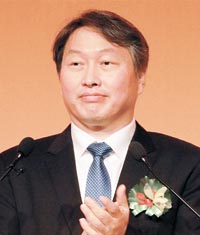 According to sources on Tuesday, the 56-year-old ordered seven key companies to boost their exports, saying more than 80 percent of revenue should come from exports for the group to become a truly global conglomerate. He said all employees should consider this the top business goal of the year.

“In a recent meeting with executives of the group, Chairman Chey ordered key companies including [chip maker] SK Hynix and [oil refiner] SK Innovation to beef up their exports,” a SK Group spokesman said Monday.

According to SK Group, about 78 percent of the revenue from these seven companies are already made on global markets. The combined revenue of the companies was 68.9409 trillion won ($56.5315 billion) last year, and about 54 trillion won was earned overseas. Chey said he wants to raise that figure to 60 trillion won this year despite tough global market conditions.

Industry insiders say the decision is significant. SK Group is the nation’s third-largest conglomerate in terms of sales after Samsung and Hyundai Motor Group, but it has relied far more on the domestic market than the other two companies. Since domestic market conditions are getting worse every day, Chey is setting his sights on overseas markets.

Chey has been encouraging his employees to focus on export markets, visiting production plants of SK Innovation in Ulsan and SK Hynix in Icheon, Gyeonggi, since he was released from prison last year through a Liberation Day special pardon in August. Chey was sprung from a four-year prison term for embezzlement.

“[SK Innovation’s] Cheongju plant [in North Chungcheong] needs to improve its production efficiency since it is the company’s NAND flash memory chip export base,” Chey was quoted as saying when he visited the plant recently. “Please try your best to boost the amount of exports.”

The core companies for SK Group’s exports are SK Innovation and SK Hynix. SK Innovation and its affiliates earned 47.3735 trillion won in revenue last year, and about 75.5 percent was made overseas. The company said it aims to improve that figure to the 80 percent level this year. The company said it will increase investment in its electric vehicle battery business in the next few years.

Other businesses like SK Energy are trying to follow the boss’ command, establishing a division to find new opportunities in the energy sector in convergence with information and communications technology.

“Expanding exports isn’t an option; it is an imperative since we need to grow,” said Lee Man-woo, a spokesman for SK Group.