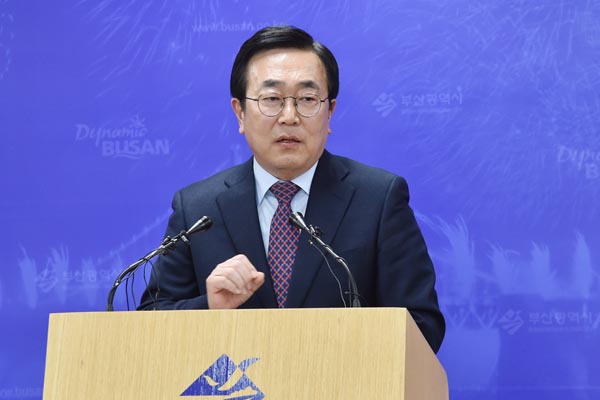 Busan Mayor Suh Byung-soo, former chairman of the beleaguered Busan International Film Festival (BIFF), disapproved of the recent appointment of 68 new members to the festival’s advisory committee, saying that “people who are not qualified enough are taking over the festival.”

“I cannot concede to the recent last-minute appointment of 68 members to the advisory committee made by [former festival director] Lee Yong-kwan,” Suh said during a press conference on Wednesday in Busan.

“By appointing a vast number of people who support him just to secure the two-thirds of committee members required to make revisions to the articles of association,” Suh continued, “he is letting down the support and devotion that the people of Busan have given him for the past 20 years.”

Suh’s announcement follows a general assembly meeting on Feb. 25 at which he walked out in the middle of discussions when the festival requested that the city hold an extraordinary general meeting to decide the fate of Lee as well as the new chief, which Suh said last month will be delegated to the private sector during his resignation announcement.

In addition, the festival has been asking for more details of the revisions that the city will make to the articles of association, which Suh promised last month would guarantee the festival’s “independence” and “freedom.”

At the meeting on Feb. 25, the request was made by 107 members of the festival advisory committee, including the 68 new members whom Lee appointed just before the general assembly meeting took place.

However, Suh insisted that the new advisory committee is not valid, as the festival’s management regulations state that when “handling urgent cases, decisions should be made under the chairman’s order.”

Therefore, he continued, the festival’s request for an extraordinary meeting, which in ordinary cases is required to be held within 20 days, is also not valid.

On Monday, Suh asked the festival to dismiss the current advisory committee according to the regulations.

“If the festival doesn’t accept my request, I am going to take legal actions, such as filing a request to suspend the execution of the festival, in court,” he said.

After the announcement was made, the festival explained that the right to form an advisory committee is up to the festival’s director, according to the articles of association, which take precedence over the management rules.

The friction between the host city and the film festival has been going on for two years since Lee, the director at the time, went against the city’s request to remove the politically charged documentary “The Truth Shall Not Sink with Sewol” from the lineup of the 19th edition of the festival in 2014.

Last year, the city accused Lee of mishandling part of the festival’s funds, pressuring him to resign. Amid criticism from cineastes at home and abroad for infringing on the festival’s freedom of expression, Suh abruptly resigned last month. He also did not reappoint Lee as the festival’s director, letting his three-year term expire on Friday.

Currently, actress Kang Soo-youn, who was appointed last year as the festival’s co-director to mitigate conflicts between the two sides, is the sole leader of BIFF.