North Korea ‘must change’ for a joint venture to be successful

North Korea ‘must change’ for a joint venture to be successful 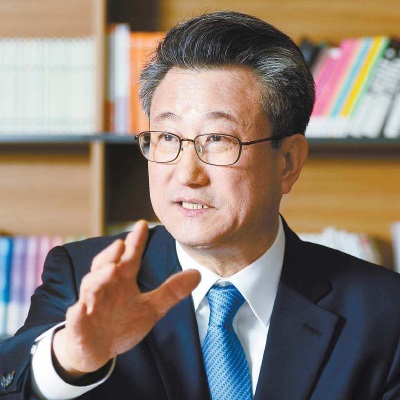 Even during the tensest moments in inter-Korean relations, the Kaesong Industrial Complex remained the last link connecting the North and the South. But that changed when Pyongyang conducted its fourth nuclear test in January and a long-range missile launch one month later, leading to the venture park’s closure once and for all.

The South Korean government concluded that the complex, once a symbol of inter-Korean peace, was a lucrative source of hard currency for the regime, which it was using to fuel its nuclear and missile programs. Nevertheless, some pundits have demanded the complex be reopened so that inter-Korean dialogue can be maintained.

On Feb. 15, the JoongAng Ilbo met with Hong Yang-ho, former chairman of the Kaesong Industrial District Management Committee, to hear more about the details surrounding the complex’s shutdown.

Q. What do you think about the government’s abrupt decision to close down the complex?

A. The government is most concerned with the security of its citizens. It needs to protect them at all times - for example, even when they disregard government warnings and travel to the Middle East.

Why do you think the Kaesong Industrial Complex was able to stay open through so many instances when relations were soured?

From the North’s perspective, the complex is an achievement of former leader Kim Jong-il, who struck agreements with former South Korean Presidents Kim Dae-jung and Roh Moo-hyun. When the complex was being built, the North worried that market capitalism from the South may bring down its closed-door economic system. But the North’s desire to sustain its dying economy was a greater concern at the time.

The North was probably also interested in picking up new skills from South Korean workers and collecting foreign currency. I was in the complex the day Kim Jong-il died in December 2011. I worried his death would bring about a sudden change in the management of the complex, but my counterparts told me, “They have to keep this complex going because General Kim built it.”

It was a difficult time, but the North Korean workers continued to work. The complex is as important to the North as it is to the South.

What does South Korea gain from keeping the complex open?

The complex is a channel for inter-Korean dialogue. Through its economic benefits, the South can try to induce change in North Korea. When the complex was built, I thought it would help ease tensions in the border area. Many midsize South Korean companies choose to base their businesses abroad to take advantage of cheaper labor costs - the Kaesong Industrial Complex offers the same benefit closer to home.

Was there no opposition from the North to building the complex?

Some military officials were probably unhappy with the idea, but since it was a project put forward by their supreme leader, there wasn’t much they could do to oppose it. If anything, the military authorities were probably upset with losing a strategically important region. The Jangjeon Port near Mount Kumgang was a naval port, and there was an artillery unit inside the mountain. With the onset of tourism in the area, the artillery unit had to be relocated to a more remote area. Some artillery units and military facilities within the Kaesong Industrial Complex also had to be moved or hidden.

You were one of the last seven people who stayed in the complex when the North deliberately shut it down in April 2013, and took care of unsettled accounts and payments. For that reason, the complex was able to reopen without much hassle in five months. When the complex shut down in 2013, how much evacuation time did North Korea allow?

Will it be hard to reopen the complex this time?

Companies cannot just move in and out of places freely. With the high risks in business, many could choose not to return.

Did the stakeholders know when commencing operations at the Kaesong Industrial Complex that their investments could be used by Pyongyang to develop nuclear weapons?

In the initial stages of operation, labor costs were so low that the stakeholders didn’t even take that into consideration. Back then, one worker earned $50 per month. I think the stakeholders were also optimistic about the fruits of inter-Korean economic cooperation. In 2000, there were plenty of analyses available that claimed that once North Korea was economically stable, it would stop pursuing nuclear weapons. Plus, the North Korean workers at the complex back then amounted to less than 10,000, and only 15 companies were involved. If Pyongyang had concentrated its efforts on public welfare instead, the complex would still be running.

Where is Kaesong headed now?

The complex has its weaknesses as well as its strengths. First, it is vulnerable to the political and military security crisis. Second, its location in North Korea limits the complex’s development. With limited communication, customs and entry, it is not easy to move in and out of the complex, and cellphone and Internet use remains difficult. Whenever South Korea raised these issues, the North would only say that it would “work on it,” though not much changed. The workers are also managed by North Korea, not by the companies.

But the complex has its benefits, and we should consider the establishment of a similar complex within a third-party country.

Shouldn’t an inter-Korean venture like the Kaesong Industrial Complex be installed near the border so that workers from both sides can easily access it?

Future inter-Korea cooperation projects should be based in neutral regions or [in China]. ... If countries like China participate, it will be harder for North Korea to act on a whim.

Have you suggested this before?

This was one of the demands South Korea made when reopening the complex in 2013. The North seemed compliant at first because it was intent on getting the complex restarted, but it eventually snubbed the proposal.

Do you think it’s wise to reopen the complex?

Given the complex’s benefits, my personal opinion is that it should be reopened. But if North Korea prompts another security crisis, the complex would have to shut down permanently. For the complex to operate normally, North Korea must change.