Filibuster is called off, vote on terror bill to follow

Filibuster is called off, vote on terror bill to follow 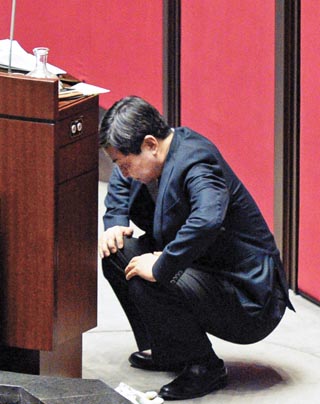 The last speaker in the filibuster, Lee Jong-kul, the floor leader of the main opposition Minjoo Party of Korea, exercises his leg muscles at around 2:20 p.m. on Wednesday. Lee began to filibuster at 7 a.m. and ended at 7:31 p.m. [NEWSIS]

The main opposition Minjoo Party of Korea decided Tuesday night to end a filibuster that started at 7:06 p.m. on Feb. 23, 2016, and was designed to prevent the counterterrorism bill from becoming law. Rep. Lee Jong-kul started a speech at 7 a.m. Wednesday to conclude the filibuster. The floor leader of the Minjoo Party was the final and 39th speaker.

The Minjoo Party decided to end the filibuster because it didn’t want to be blamed for paralyzing the legislature and preventing the passage of a different bill to redraw the electoral constituency map for April’s general election. It feared being blamed for derailing the election.

An adamant objector to the bill sponsored by the ruling Saenuri Party, Lee shed tears during his speech. He apologized to the public and the 38 other lawmakers who participated in the filibuster for the party’s decision to end it. The contentious bill was introduced to a vote by Speaker Chung Ui-hwa on Feb. 23. The Minjoo Party immediately started a filibuster to stop a vote.

The bill establishes a counterterrorism center inside the Prime Minister’s Office and gives the National Intelligence Service (NIS) a mandate to collect information. The opposition claims it gives too much authority to the NIS, which has persistently involved itself in domestic politics.