Minjoo calls for liberals to unite

Minjoo calls for liberals to unite 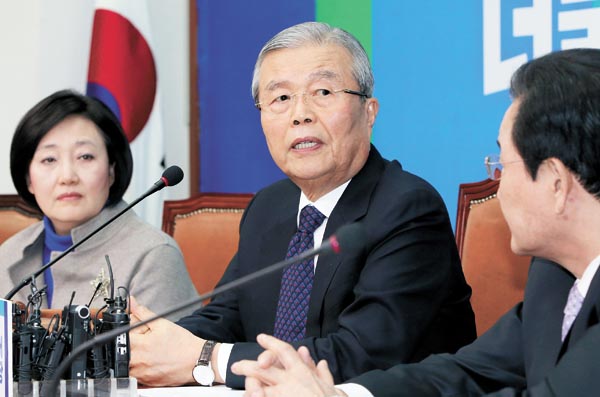 The interim leader of the main opposition Minjoo Party formally proposed Wednesday a liberal merger with the minor opposition parties ahead of the April general election, inviting politicians who recently abandoned the party to return.

“I am once again proposing unity to the politicians in the opposition,” Kim said during a meeting of party leaders. “We don’t have the luxury of time. For a greater cause, for the advancement of democratic politics, to win the general election and to win next year’s presidential election, the opposition must unite.”

After the meeting, Kim said he was thinking about the liberal parties merging, not just forming an electoral coalition.

“The liberals were split because of a very simple reason,” Kim said. “Most of the lawmakers who abandoned the Minjoo Party did so because they were dissatisfied with its leadership at the time. But now that’s over. I don’t think it would be hard for them to find an opportunity to merge again, as long as they are not too obsessed with a justification.”

His proposal was intended as an open invitation to the politicians who left the largest opposition party to return. Since December, more than a dozen lawmakers, including Rep. Ahn Cheol-soo, left the party to protest the leadership capabilities of its chairman at the time, Moon Jae-in. They went on to create their own group, known as the People’s Party.

Moon, who was defeated in the 2012 presidential race to President Park Geun-hye, was elected chairman of the country’s main opposition party on Feb. 8, 2015.

As part of a road map to reinvent the party, he recruited Kim, the architect of President Park’s economic policy during her bid for the Blue House, to head the opposition’s general election campaign, later stepping down from his post as chairman to surrender authority to Kim.

Kim’s power was further emboldened earlier this week after the Minjoo Party moved to transfer nomination rights to the committee he oversees. He now has the discretionary authority to nominate or flunk incumbent lawmakers for the general election and recommend proportional representatives.

Observers have speculated that Kim’s next move will be to revise the party’s regulation that bans defecting members from returning in order to bring back the lawmakers who moved to the People’s Party.

The Minjoo leader’s proposal came as the People’s Party marked its one month anniversary Wednesday. Rep. Park Jie-won, a political heavyweight based in the Honam region, joined the People’s Party on Wednesday, increasing the number of its current lawmakers to 18.

With just 18 lawmakers, it has seen its approval ratings plummet. In a Realmeter poll conducted from Feb. 22 to 26, the ruling Saenuri Party saw 43.5 percent support, the highest since September.

The Minjoo saw its approval rating at 26.7 percent, and the People’s Party 12.1 percent.

Kim’s offer also appeared to target certain lawmakers in the People’s Party rumored to be preparing their departure.

Last week, the ruling and main opposition parties held preliminary evaluations for all incumbent lawmakers, weeding out the bottom groups in order to make room for fresh blood in the nomination process. This strategy, often referred to in Korean politics as “changing the water,” was also considered by the People’s Party.

Ahn, the co-chairman of the People’s Party, reacted sensitively to Kim’s proposal for a merger. “Making this proposal at this particular timing is suspicious,” he said Wednesday. “He should attend to his own party’s matters first.”

Ahn, a presidential contender, has made clear his position that his party has no intention to form an electoral alliance with the Minjoo Party, a stance that remains unchanged.

Still, other leaders in the People’s Party reacted with caution. “This is something that I cannot respond to hastily,” said Rep. Chun Jung-bae, the co-chairman of the People’s Party. “I will consider Kim’s true intentions first.”

The Saenuri Party, however, condemned his proposal for a liberal merger. “If they were to merge again, it makes me wonder why they split in the first place,” Saenuri Chairman Kim Moo-sung said. “It’s obsolete politics.”

“They parted to form different parties because they had different identities, platforms and policies,” Won said. “It is hard for me to understand that they will merge just for an election victory.”

Political parties operate on state subsidies from tax money, he added, and the liberal merger, if it takes place, would only exacerbate the public’s wariness for politics.