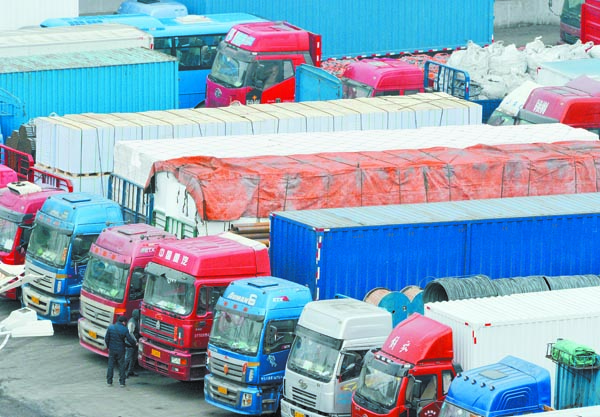 North Korean truck drivers stop at customs on Tuesday in the Chinese border city of Dandong on their way back to North Korea. That day, Russia requested that the vote on a UN Security Council resolution imposing stricter sanctions on North Korea be delayed for 24 hours. [NEWSIS]

The United Nations Security Council on Wednesday was set to vote on a new resolution expanding sanctions on Pyongyang that would target more individuals and entities than ever before - but would exclude North Korean leader Kim Jong-un.

Also missing from the blacklist was his younger sister, Kim Yo-jong, the vice director of the Propaganda and Agitation Department under North Korea’s ruling Workers’ Party who is tasked with maintaining her brother’s public image.

The vote on the resolution was initially expected to take place Tuesday but was delayed because Russia, one of five veto-wielding nations on the council, asked for a 24-hour review period.

The blue text of the UN Security Council resolution received approval last week from the United States and China, permanent members on the 15-member council.

There was some speculation that Kim and his powerful sister would make the list. Instead, Ri Man-gon, director of North Korea’s Munitions Industry Department and a ministerial-level official, is anticipated to be the most senior among the persons targeted in the sanctions.

Ri has often accompanied Kim Jong-un on field inspections around the country and is responsible for overseeing the munitions industry and missile development.

His role has become especially high-profile since North Korea conducted its fourth nuclear test on Jan. 6.

“After conducting the nuclear test, Ri took a picture with Kim Jong-un to commemorate the event,” a South Korean government official said. “After seeing the photo, our government analyzed the related intelligence and reported it to the Security Council, which is why he has been included this time.”

The resolution to be adopted is not expected to be as strong as the initial draft, however, particularly because Russia requested softening a clause that would ban aviation fuel supply to North Korea, Japanese broadcaster NHK reported.

Some analysts point out that Russia is trying to make its diplomatic clout known.

While North Korea’s relationship with Beijing has deteriorated in recent years, notably after the execution of Jang Song-thaek, the once-powerful uncle and protector of Kim Jong-un, Moscow has maintained - if not strengthened - its diplomatic ties with Pyongyang.

Yet some analysts have noted that Russia also has more at stake with the resolution’s passage, including economic incentives.

The United States initially requested a vote on the resolution take place Tuesday, but it was delayed after the Russians asked for a day to review.

“As I understand it,” he said, “the United States did request a vote on the resolution today, and the Russians asked for a 24-hour review period, and we’re in that period now.”

He added that the language of the resolution “has been pretty far advanced” and that the review process is “procedural.”

“The Russians have asked for it, and it’s going to be honored.”

The sanctions are expected to be the toughest in 20 years and for the first time would impose broad, sectoral economic sanctions against North Korea.

It was expected to ban the export of coal, iron, gold, titanium and other rare earth minerals that are being used to fund North Korea’s nuclear and ballistic missile programs.

It would also for the first time subject all cargo going in and out of North Korea to mandatory inspection. A prohibition would be set on the sale and transfer of small arms and other conventional weapons to and from Pyongyang, and North Korean diplomats engaging in illicit activities would be expelled from the country.

Countries would additionally be required to freeze the assets of entities linked to North Korea’s nuclear and missile programs. Other measures included a ban on the export of aviation and rocket fuel to North Korea.

However, according to the state-run Russian news agency TASS, citing Russian UN diplomats, several changes were made in the final text of the resolution after consultations with the United States, including a softening of the ban on jet fuel deliveries.

TASS reported that the revision requested by Russia called for easing the clause on banning aviation fuel exports to allow for North Korean commercial airliners refueling at Russian airports to receive jet fuel so that they can return to Pyongyang.

Moscow also asked for a North Korean official, Jang Song-chol, who is believed to be a Korea Mining Development Trading Corporation (Komid) representative to Russia, to be removed from the blacklist.

But Russian Ambassador to the UN Vladimir Churkin told TASS that Jang is “not even in Russia.”

Other North Korean Komid representatives in Vietnam, Iran and Syria were included on the blacklist, which initially had 17 individuals.

“Out of its air routes, the most people use the Vladivostok and Pyongyang flights, because there are a lot of workers who use this line,” said Ahn Byung-min, a senior researcher at the Korea Transport Institute and an expert on North Korean and Eurasian infrastructure.

“North Korea and China have 16 routes for land transport, including railroads,” Ahn said. “But between Russia and North Korea, they have one railway, which is not frequent, and the airlines have the most important role in the transport of people and goods. So in spite of economic sanctions, if the air route is cut off, this would have a huge impact on the exchange of human resources or goods.”

Ahn added that the main incentive for Russia in asking for this exemption was likely economic.