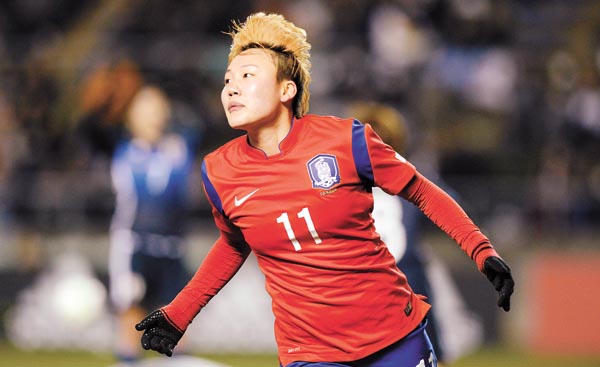 South Korea women’s national football team tied 1-1 with archrival Japan in the second game of AFC qualifiers for the Rio Olympics on Wednesday.

South Korea is currently ranked third in the group.

South Korea and Japan were scoreless until the 84th minute of the match when Japan broke the stalemate after Mana Iwabuchi came off the bench to score with a header.

The goal was more painful as it came after a penalty-kick miss by Ji So-yun of Chelsea Ladies in the 70th minute. But Jung Sul-bin equalized only 3 minutes after Japan’s goal with a turning shot off her right foot when she capitalized on a turnover made by Japanese goalie Miho Fukumoto.

It was Jung’s second goal in the final qualification round. She also scored against North Korea on Monday.

With another tie under their belt, South Korea can still hope to qualify for the Rio Olympics. Manager Yoon Deok-yeo has said that the team’s aim for the final qualification round is three wins and two draws.

Considering South Korea is 18th in FIFA ranking, the two draws against two top-ranking teams in the group, No. 6 North Korea and No. 4 Japan, are a good start. Now, South Korea will have to clinch three straight wins against No. 9 Australia, No. 17 China and No. 29 Vietnam to climb up to second in the group standing. South Korean ladies team has never qualified for the Olympics since women’s football became an official event at the 1996 Atlanta Olympics.

Because of the tied game on Wednesday, the South Korean women’s overall record against Japan now stands at four wins, nine draws and 14 losses.

South Korea will play Australia today at Yanmar Stadium Nagai in Osaka. The game will not be easy for South Korea. Australia, currently ranked first in the group standing while scoring 12 goals in the past two matches, is coming off the match against Vietnam on Wednesday where the Aussies dominated their opponent 9-0. Australia also defeated Japan by 3-1 on Monday.

After the game against Australia, South Korea will have two matches remaining in the final qualification round, against China on Mar. 7 and Vietnam on Mar. 9.