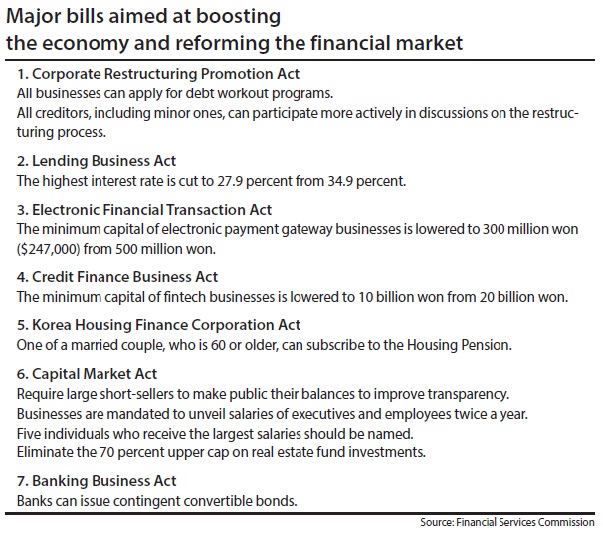 As many as 20 bills aimed at carrying out financial reforms were passed by lawmakers early Thursday, nearly a year after they were first introduced.

The bills were stuck in the National Assembly as the ruling and opposition parties fought bitterly on issues that included deregulating certain industries to help revive the sluggish economy.

Although the most contentious legislation involving labor market reform and the development of the service industry were held back, many were relieved by the passage of the bills and expressed hope the move would accelerate the Financial Services Commission’s (FSC) plans to boost growth of the country’s financial industry and raise its competitiveness abroad.

More were upset, however, that two crucial bills involving the establishment of a holding company for the Korea Exchange and easing of regulations on the governance of web-based banks couldn’t get enough support from lawmakers.

“The FSC will do more to complete passage of the two bills,” said Yim Jong-yong, chairman of the commission. “Additional legislation needed for the financial reforms will be submitted in July.”

The 20 bills include revisions to the Corporate Restructuring Promotion Act, the Capital Market Act, Lending Business Act and the Banking Business Act.

The Corporate Restructuring Promotion Act will be turned into law, allowing all debt-ridden companies to apply for workout programs.

Currently, only corporations with more than 50 billion won ($40 million) in total debt can undergo workout programs. That qualification will be lifted, allowing all companies - particularly struggling small-size enterprises - to take advantage and improve their financial health.

Minor creditors like institutional investors will also be allowed to participate in decision-making involving corporate restructuring.

Under the amended Lending Business Act, the highest interest rate imposed by private lenders on consumers cannot exceed 27.9 percent, down from the current 34.9 percent. The new rate was implemented immediately on Thursday. Both new loan contracts and extensions or renewals of contracts will benefit from the lowered rate.

It will also become easier to subscribe to the Housing Pension because of a revision to the Housing Finance Corporation Act. Currently, only homeowners aged 60 or older can subscribe. Under the revised regulation, homeowners younger than 60 can subscribe if their spouse meets the earlier age requirement. The FSC expects an increasing number of homeowners to subscribe, and it plans to expand the capital limit of the Korea Housing Finance Corporation from the current 2 trillion won to 5 trillion won to meet demand.

As early as September, a new institution in charge of supplying public funds for micro-finance services for the working class will be established. The services are currently governed by several different institutes, which is inconvenient for people who are not knowledgeable about the financial industry. Loans with lower interest rates for low-income households or those with low credit rating levels, such as Miso Finance and Haetsal Loan, will be managed by the new institution.

Lawmakers were most vehement in their opposition to the Service Industry Development Basic Act, a major plan devised by the government to bolster economic recovery, which did not pass.

“The service bill pending at the National Assembly is not related to allowing hospitals to set up profitable subsidiaries as some lawmakers argue,” said Bang Moon-kyu, vice minister of health and welfare, at a briefing held at the Seoul Government Complex on Thursday.

The Ministry of Strategy and Finance and related government branches have been heavily supporting the new law, which they say will increase employment in the service industry and support start-ups in the sector. The Finance Ministry has been emphasizing that the law is necessary to create new jobs and boost economic growth.

“The service law ultimately raises concerns about the privatization of the medical industry,” said Kim Yong-ik, a Minjoo Party of Korea lawmaker.