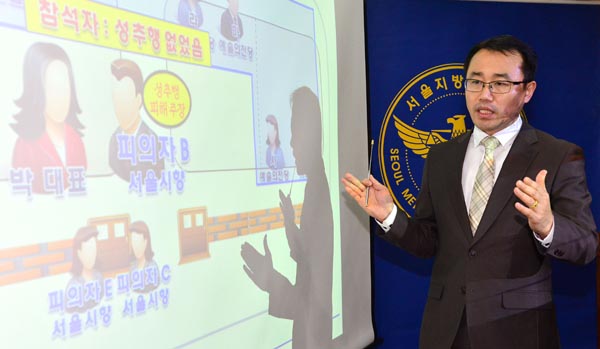 Park Hyun-jung, former president of the Seoul Philharmonic Orchestra (SPO), on Thursday was cleared of all charges including sexual and verbal harassment of employees, according to the Seoul Metropolitan Police Agency.

Park, who had been investigated by police over harassment claims, has now become a plaintiff in a defamation case.

The police agency’s cyber investigation team announced Thursday that it will forward 10 SPO employees, who have been booked without detention for spreading false information about Park, to the public prosecutor’s office today.

“We found the employees’ claims of Park sexually harassing an employee surnamed Gwak during a company gathering, which was held together with employees of the Seoul Arts Center in September 2013, to be false,” said team leader Byun Min-seon.

“We also found out that Park often reproached her employees, but we believe her words were at levels acceptable in a company,” Byun said, adding that it was difficult to find the facts in this case since the employees’ testimonies kept changing. Park acknowledged that she had been harsh on employees because she didn’t like how the orchestra was being run under the former artistic director and principal conductor, Chung Myung-whun.

The orchestra has been in turmoil since 17 employees sent out a statement to local journalists and the board of directors on Dec. 3, 2014, insisting that their boss had been sexually and verbally harassing them. Referring to the statement as their “cri de coeur,” the employees wrote that they were “standing at the edge of a cliff” and described in detail how Park had reiterated on several occasions to employees transferred to new departments that “if any damages occur in regard to the orchestra, you will have to sell your organs because you won’t be able to pay [that debt] on your salary.” They also said she often yelled at female employees to “go out and sell records wearing miniskirts” and that they would be “better working as barmaids.” 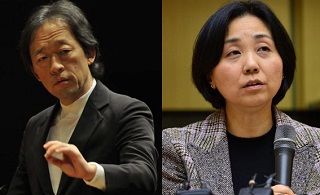 Although Park denied the accusations, she faced fierce public criticism and was subject to a police investigation. She also filed a defamation lawsuit against the group of employees. She decided to step down from her post on Dec. 30, 2014, just before the orchestra’s board of directors was to officially dismiss her.

Then, in a sudden twist, police booked Chung’s wife, surnamed Koo, 68, without detention for directing the employees to write and send the statement. When the police seized and searched the SPO office last March, they found text messages from Koo to some employees containing words like “scenario” and “liaison.”

However, Koo, who holds American citizenship, has been staying in France ever since the issue arose in late 2014 and did not comply with the investigation. Police said they will indict her at the prosecutor’s office, together with the 10 employees, today.

But Chung’s attorney, Kim Young-mun, released a press statement Thursday afternoon refuting the investigation results, saying the police are implicating Koo after “merely piecing together words in text messages to their liking.” Kim added that the employee testimonies are true and that Koo did not orchestrate them, but only “helped the employees who were being treated inhumanly to fight for their rights.”

Meanwhile, Chung, who has also been mired in controversy over the way he ran the SPO, announced his departure as the principal conductor and artistic director on Dec. 31 and left for France. 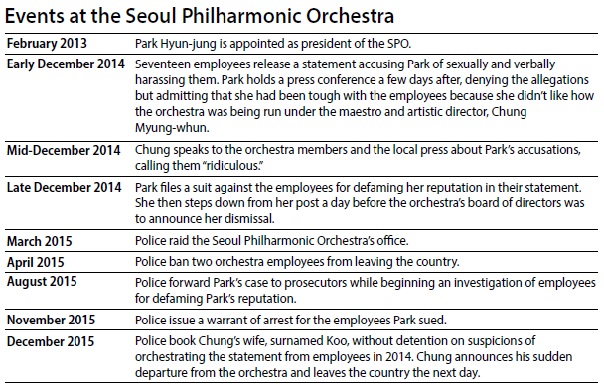 The SPO released a statement Thursday saying the outcome is regretful and that it believes the employees’ testimonies, explaining that their testimonies were accepted by the Seoul Metropolitan City’s Human Rights Center during its investigation. The orchestra added that it will do whatever it can to cooperate with the police investigation.