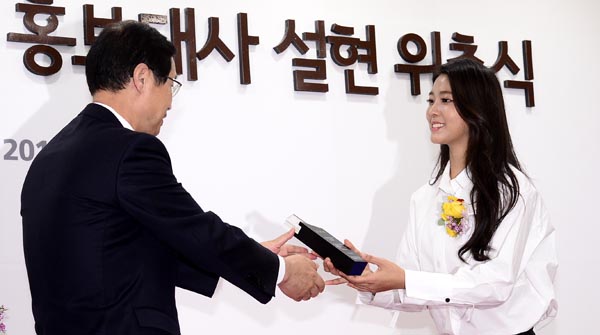 Seolhyun, a member of the K-pop girl group AOA and a popular commercial model, was requested be the ambassador for the April 13 general election.

The Central Election Management Committee released an appointment letter on Thursday to the singer at the Gwacheon Government Complex in Gyeonggi.

“Seolhyun is getting much love from fans as a model and a singer,” said Kim Yong-hee, the head of the committee.

He expressed his high expectations for Seolhyun’s influence on bringing awareness to the importance of voting.

The K-pop star said at the event that she hopes to “help encourage voting” and will put forth her maximum effort.

Along with news anchors Kim Min-jeong, Bae Hyun-jin and Jeong Mi-sun of the three major broadcasters - KBS, SBS and MBC - Seolhyun will be the face of promotional materials across various media.

Seolhyun also has endorsement deals with many companies like SK Telecom, Gmarket and Hazzys.