Shilla’s hanok-style hotel gets the nod at last

Shilla’s hanok-style hotel gets the nod at last 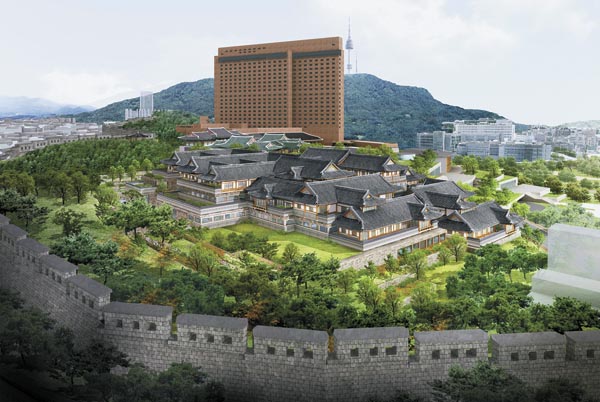 The Seoul Metropolitan Government on Thursday approved Hotel Shilla’s plan to build a 91-room hotel complex in traditional Korean style near its main hotel building after four rejections over the past five years.

To be completed by 2022 at the earliest, the complex is set to become the first hotel in Seoul to be built in the style of a traditional Korean home, or hanok.

“The building of an urban hanok-style hotel in Seoul will offer a tourism and accommodation facility that is totally different from existing spots,” said Lee Je-won, vice mayor of Seoul. “The hotel is expected to improve the environment of the neighboring area and play a supportive role in having the Seoul City Wall named a World Heritage site by the United Nations Educational Scientific and Cultural Organization [Unesco].”

The complex, with a massive budget of around 300 billion won ($247 million), will be composed of separate hanok buildings with three stories below ground and three stories above. It will be on the site of the current duty-free shop next to the Hotel Shilla in Jangchung-dong, Jung District, central Seoul.

The complex will have a separate building devoted to restaurants, shops and an underground parking lot. The duty-free shop will be relocated to the current site of a parking garage.

The Seoul government said it decided to approve the plan after taking into account Hotel Shilla’s potential contribution to the tourism industry, fairness with other hotels and its ability to handle transportation volume in the neighborhood.

The city government rejected previous plans, saying they didn’t contribute to the surrounding area or infuse any historical meaning to the hotel complex. Hotel Shilla is a hotel subsidiary of Samsung led by bedridden Chairman Lee Kun-hee’s first daughter Lee Boo-jin. Its shares on the main Kospi rose 5.2 percent to close at 70,700 won on Thursday.

The approval came after Hotel Shilla made a series of compromises and plan changes to meet government requirements.

The hotel is poised to purchase land nearby and clean up some old and ugly buildings, thus making a public contribution. It reduced the number of floors in the hotel plan, lowering the height of the buildings by 4 meters (13 feet). The number of rooms were slashed by 116 to 91, and the entire floor space of the hotel shrank by 26 percent.

The hotel will work on the design over the next year, and construction is set to take about five years.

“We intend to maximize the beauty of hanok while combining the convenient aspects of modern architecture,” a Hotel Shilla spokesman said.

Although the foundation of the building will be made of concrete, the remaining parts, including pillars and beams, will be made of wood. Traditional roof tiles, called giwa in Korean, will be mounted on the roof.

There are a few premium hanok hotels outside of Seoul, including the Gyeongwonjae Ambassador in Incheon; O Dong Jae in Yeosu, South Jeolla; the Millennium Palace in Gyeongju, North Gyeongsang; and Gurume in Andong, North Gyeongsang.