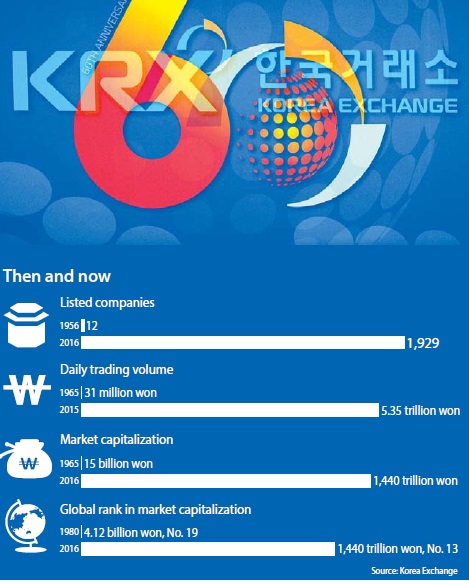 The achievements are significant for a stock exchange that opened just 60 years ago as of Thursday.

When the operator Korea Exchange (KRX) opened the capital market on March 3, 1956, only 12 companies were listed. Most were owned by the government, including the Korea Electric Power Corporation and Posco. The market was so small that it was unable to aggregate its market capitalization.

When the KRX first estimated the value of the market in 1965, it totaled just 15 billion won.

It took until 1973 for more than 100 companies to be listed for public trading, following a government-legislated bill in 1972 that encouraged private companies to go public.

At the beginning of this month, there were 770 companies listed on the primary Kospi, with 1,159 on the secondary Kosdaq.

“The Seoul bourse was the main contributor to the nation’s growth by helping small companies procure liquidity by going public and letting them grow into the global companies of today,” KRX CEO Choi Kyung-soo said at a ceremony Thursday evening in Yeouido, southwestern Seoul.

Foreign investors were first allowed to make purchases in 1992. That year, foreign investment accounted for 4.9 percent of the total on the Kospi, at 84.7 trillion won. It grew gradually to 42 percent in 2004, but failed to expand past that point and even shrank to 31.9 percent, or 386.98 trillion won, as of the end of last year. Some of the slump can be attributed to the lingering effects of the financial crisis from the second half of 2008.

Korea’s capital market further expanded with the opening of the secondary Kosdaq, modeled after the U.S. Nasdaq, in July 1996. When it first opened, the market’s goal was to help small and midsize companies with promising products and services gain easy access to investment.

Over the last eight months, the Korean market has seen an outflow of foreign capital largely due to deepening instability in emerging markets.

Ruling Saenuri Party Chairman Kim Moo-sung, who also attended the ceremony, promised that “the ruling party will do its best to eliminate legal barriers in establishing a holding company for the KRX at the April general meeting of the National Assembly, in order to help local markets become as competent as other global stock exchanges like Hong Kong.”