KT embarks on ‘healthtainment’ for the home

KT embarks on ‘healthtainment’ for the home 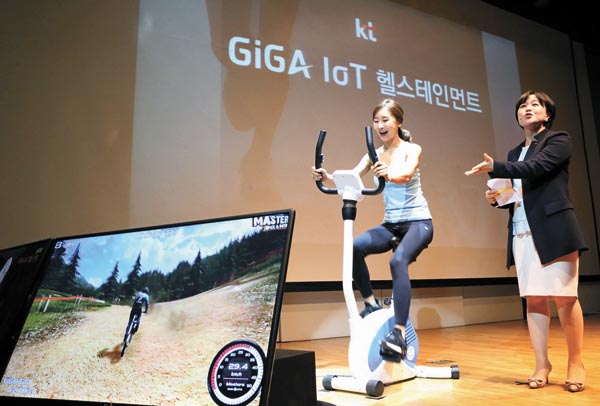 The competition to grab more customers by connecting household gadgets over the Internet is getting fierce in the telecommunications industry.

“As the IoT service market expands, providing infrastructure that enables the services is vital,” Song Hee-kyoung, executive vice president of GiGA IoT business division at KT, said at the business briefing session at the company’s headquarters in Olleh Square in central Seoul on Thursday. “We’ll strengthen the home IoT services based on our network infrastructure by collaborating with service and device developers of all sizes.”

The “healthtainment” service connects physical training equipment to Olleh IPTV (Internet protocol television) and to IPTV video games. Interactive TV subscribers can work out on exercise bike equipment - set up with sensors to monitor the user - while playing a video bike game. Users can also improve their golf skills via a virtual coaching program. The smart training services will launch soon at a price of around 400,000 won ($330).

KT is a relative latecomer in the home IoT business, but it hopes to gain market share this year from other market leaders like LG U+ and SK Telecom.

With the individualized services, KT is aiming for 500,000 subscribers by the end of this year, and to become No. 1 in the market by 2018. The carrier plans to introduce more than 30 home IoT services this year to reach the goal.

LG U+ recently announced it already has 100,000 subscribers to its home IoT services within the first six months of launching, while the largest player, SK Telecom, estimated some 120,000 users.

Kim Joon-seob, an analyst at Eugene Investment & Securities, explained that the strong market power in telecommunications infrastructure, like high-speed Internet and IPTV, which are KT’s strengths, will help it gain market share.

“Although KT is little late when it comes to number of subscribers, it has plenty of possibility to gain market share because home IoT is still a small market that’s just starting out, a lot smaller than industrial IoT technologies,” Kim added.

LG U+, the third-largest carrier, also unveiled its new highly individualized smart refrigerator on Thursday, which it has jointly developed with Samsung Electronics.

The refrigerator was developed for the growing senior population. It tracks usage and warns neighbors if the fridge is not opened for 12 hours or more, which may indicate an emergency situation involving an elderly resident.

SK Telecom last month joined hands with Hyundai E&C to supply its smart home IoT service platform to newly built apartments in the Seoul and Gyeonggi area in the second half this year. It is planning to roll out more than 100 smart home care services this year