Academy Award-nominated film “Joy” tells the rags-to-riches story of Joy Mangano (Jennifer Lawrence), left, who became a millionaire businesswoman with her selfwringing mop, which she invented herself based on her experience doing housework every day. [20TH CENTURY FOX]

The Oscar-nominated film “Joy” is a powerful story about the American dream, loosely based on the rags-to-riches tale of Joy Mangano, who became a millionaire businesswoman after hitting the jackpot with a self-wringing mop (also known as the Miracle Mop) that she invented herself.

However, Ken Mok, who initiated the project and also produced the film, says the story will resonate just as much with Korean audiences as it does with the Westerners, because in the 21st-century, it is all about “Asian dreams,” as seen in the immense economic and cultural strides Korean and other countries have made in recent years.

“In the 20th century, it was about American dreams, but in the 21st, it is all about Asian dreams,” the Chinese-American producer said in a recent interview in Seoul, which he visited while on a promotional tour for “Joy.”

“All of the innovation, technology and people who are becoming millionaires are out of this region,” he added. 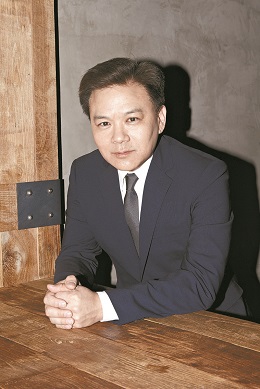 Mok, a television guru in the United States who was behind the successful reality show “America’s Top Model” as an executive producer, first came across the story of “Joy” when Mangano joined one of his TV shows, “Made in the U.S.A.,” as a judge and revealed her personal story one day.

“[After she told her story], I said that is an incredible, crazy story that should be made into a movie because there are so many dramatic elements to it,” he said.

“When we got the script out to directors and actors, there was lots of interest right away. [Director] David O’Russell came on board and he said that he wanted Jennifer Lawrence to star in the film, and we said, ‘Please’.”

Directed and written by O’Russell, the film starts off by showing Mangano struggling to support her family while working several jobs at once on top of raising two children as a single mother.

However, holding on to the grand dreams she once had as a capable young girl, Joy ventures out to sell her own mop, which she invented from scratch using wisdom she obtained from doing housework every day.

Jennifer Lawrence plays Mangano while Bradley Cooper appears as Neil Walker, a QVC executive who gives Mangano the once-in-a-lifetime chance to sell her invention on the TV shopping network.

“The most memorable part of the film is where Joy goes in front of the camera and starts to sell mops after the sign of, ‘OK, go!’ It was either she sells 60,000 mops or be done. That was the actual, true moment. And she sold all of that within seven minutes. That to me was the high point of the movie,” Mok recalled.

Another aspect on which the producer thought “Joy” would resonate highly with Korean audiences was its story of a self-made women.

“I think in Korea, it is a century of women,” he explained. “They are the ones who are really starting to break through, becoming huge successes and breaking the glass ceiling. Just doing the press today, I say 90 percent of them were women which is fascinating.”

“When I was here two years ago filming an episode for ‘America’s Next Top Model,’ I got to have dinner with Kim Sung-joo [the CEO of MCM Holdings AG and Sungjoo Group], and her story was amazing. In a lot of ways, her story was the story of ‘Joy’.”

Mok hoped that anyone holding out hope for their own success will watch the movie and “think that anybody can do it, too.”

When asked if his decision to tell this successful story of a social minority has something to do with his own success, the 55-year-old admitted that “as the only Asian producer back in the day in the TV, film businesses,” he needed to be a “trailblazer” in some way.

Taking an immense interest in Korean entertainment industry, Mok revealed that he is considering for his next feature film a project that will take place in Korea and feature Korean actors.

“Korea is hugely important, especially in the movie industry,” he said. “It is not a U.S.-based industry anymore. Asia is becoming extremely important to Hollywood, and I think Korea is a key component of that. I am very impressed with Korean storytelling, which is almost down to some sort of science where they know exactly how to push people’s buttons and make them cry.”

Other than that, he said he has been browsing Korean dramas - to the point where he has watched “more than 100 productions” - to find the suitable one to adapt for the American market.