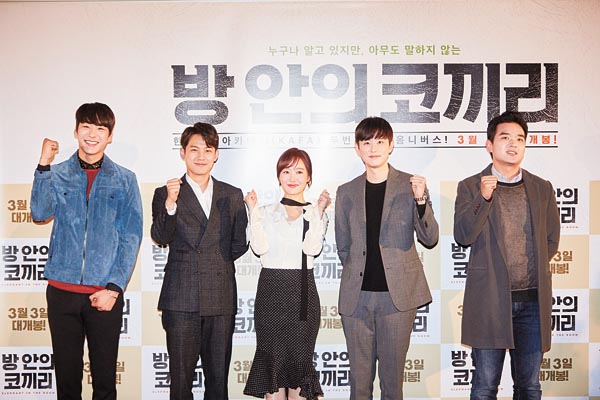 The cast of the film “Elephant in the Room” smile for the cameras at a press conference. From left are Kwak Si-yang, Seo Jun-young, Mi-ram, Gwon Yool and Kim Jae-young. The film opened at select theaters on Thursday. [KOREAN ACADEMY OF FILM ARTS]

The Korean Academy of Film Arts (KAFA) has again released one of its very own 3-D omnibus films, this time titled “Elephant in the Room.”

Unlike its predecessor, “Elephant in the Room,” for which the title is borrowed from the English idiom referring to an issue that everybody knows about but does not want to discuss, has been crafted by up-and-coming directors who experimented with domestic 3-D technology.

The first story, “Chicken Game” directed by Park Soo-young, is about lies. As the title indicates, three people, each not wanting to be the loser of the chicken game, tell each other lies in the middle of the urgent situation.

The second story, “Second Account” directed by Kwon Chil-in, talks about a woman’s solitude. The main character, In-kyung, forms one-time relationships with people she meets through social media, but her loneliness does not seem to be relieved.

However, things change after she meets a man with a kind manner, who is different from others she met before.

The final story, “Lucid Dream,” has trauma as its main theme. Director Gwon Ho-young wanted to focus on how a person can overcome trauma and used a dream as the setting.

“Elephant in the Room” is a tangible outcome of the program that KAFA set up in 2012 to train domestic manpower in utilizing 3-D movie technology. It was in a way an effort to keep up with the international trend of emphasizing 3-D technology in movies, as evidenced when “Avatar” (2009) became a worldwide sensation.

However, the film has its flaws, in terms of using the technology in a sophisticated way and maintaining coherency of the plot.

“We tried to feature the film in order to highlight the volume of the space through 3-D technology,” director Gwon said. “However, due to the lack of budget, it was difficult to re-do the unsatisfying scenes.”

“Nevertheless, I enjoyed filming what I wanted to produce, without interference from others,” he added.

Despite the difficulties, KAFA enabled these aspiring directors to think outside the box.

While horror, thriller and action films make up the majority of 3-D films, this time the directors tried to utilize the technology in less splashier genres such as romance and drama.

“I wanted to see whether a romance film could be well represented in 3-D,” director Kwon said. “The space and its depth were able to portray the psychology of the protagonist. It proved that 3-D film can convey deeper layers of the emotion of the characters.”

The film opened at select theaters on Thursday.