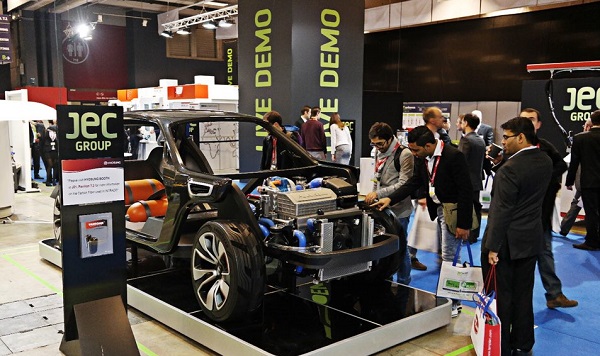 Hyosung, along with Hyundai Motors and Lotte Chemical, received an Innovation Award at the JEC Europe 2015 in Paris last March. The award was for the design of their carbon-framed concept car “Intrando.”

Celebrating its 50th anniversary this year, Hyosung plans to continue advancing through change and innovation. It hopes to turn challenges such as low oil prices, low interest rates and the depreciation of the won into opportunities as it grows into a 100-year company.

Hyosung was the first in Korea to successfully develop carbon fibers using its own technology. Carbon fiber is a new material four times lighter than iron while being 10 times stronger. It has many uses, ranging from leisure products like golf clubs all the way to auto parts.
The domestic carbon fiber market was wholly dependent on imports until 2012, when Korean companies including Hyosung began commercial production. This newfound self-sufficiency is expected to lead to increased import substitution. The carbon fiber market is also ripe with potential, recording an annual growth rate of over 12 percent.

Hyosung’s heavy industry sector recovered in 2014, earning 152.2 billion won in operating profit after a three-year deficit. It is said to have gained product competitiveness by improving quality and strengthening business activities in foreign markets such as Europe and Saudi Arabia.

Last December, Hyosung became the first Korean company to build an electric grid and sign a memorandum of understanding on transmission networks and towers in Mongolia. In August, it landed a contract worth approximately 45 billion won for the construction of gas insulated switchgear in butane hydroelectric substations, accumulating a total of over 100 billion won in construction deals.

In keeping with this growth trend, Hyosung seeks to expand even further overseas using energy storage systems such as extra-high voltage transformers and circuit breakers. Being the only Korean company with commercialization techniques for static synchronous compensators (SSC), Hyosung also plans to use SSC to enter foreign markets. Its goals include a higher contract success rate next year across the Middle East, North Africa, Asia and North America.

Creora, Hyosung’s high value-added spandex brand, was attentive to customers’ needs when it developed functional products and supplied them to major lingerie and fashion brands such as Victoria’s Secret. The quality of their products has been recognized in top global markets.

In 2014, just two years since beginning production in Brazil, Creora established itself as a leader in the spandex field with a market share of over 50 percent. It has also built additional factories in Vietnam and China, bringing Hyosung’s global spandex production to 190,000 tons. Hyosung has laid the groundwork for international expansion by building a web of production facilities around the world.

This year, the spandex market has suffered due to excess supply from China and decreased demand from Western Europe. However, Hyosung plans to use customer-oriented marketing and product differentiation to rise above the challenge.

Hyosung saw steady growth during the decline of the global tire market in 2015 due to its efforts to enter new markets, differentiate its products and improve quality through constant innovation and process control.

One example is Hyosung’s tire cords. Used as a stiffener in tires, tire cords are vital for a driver’s safety. The company’s cords go through rigid quality inspections, and Hyosung has proven their quality time and again by being a steady supplier to major tire companies known to be selective.

This year, tire production is expected to increase in Asia and North America. Hyosung sees this as an opportunity to strengthen its hold on the market through product differentiation, tailored marketing and entry into new markets.