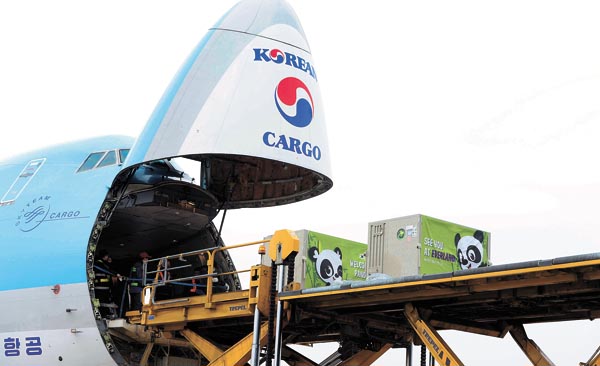 Ai Bao and Le Bao, two giant pandas promised to Korea by Chinese President Xi Jinping, arrive at Incheon International Airport on Thursday. The pair traveled in custom-made cages aboard a Korean Air Boeing 747 freighter, with a Chinese veterinarian and a Korean zookeeper on standby. [NEWSIS]

Xi pledged the bears to President Park Geun-hye when the two met for talks in 2014 in Beijing.

The 2-year-old female panda, named Ai Bao, or “lovely treasure” in Chinese, has been described as having a gentle personality. She likes to sleep in trees and play in the water.

Le Bao, her 3-year-old male counterpart whose name translates as “a treasure that gives happiness,” loves to climb trees and do handstands.

Their names were selected out of 8,500 suggestions submitted by Korean and Chinese citizens via Facebook and Weibo, a Chinese social networking service.

Born in Sichuan, China, Ai Bao and Le Bao had never before ventured outside the Sichuan Giant Panda Sanctuaries until Thursday. For a pair of giant pandas, who together weigh nearly 181 kilograms (400 pounds), a 2,400-kilometer (1,490-mile) trip is no easy feat.

However, their stakeholders ensured the two traveled in style to the Everland Resort in Gyeonggi, the bears’ new home.

The panda sanctuary in China hosted a proper farewell ceremony Wednesday for the pandas, who were shipped in custom-made cages aboard a Korean Air Boeing 747 freighter.

Over the course of the flight - three hours and 20 minutes in total - Ai Bao and Le Bao received eight check-ups, one every 20 to 30 minutes. One Korean zookeeper, one Chinese zookeeper and one Chinese veterinarian remained on standby.

The pandas were welcomed at Incheon International Airport by a marching band and traveled in a non-vibration vehicle - in which horizontal balance, temperature and humidity are automatically maintained - to Everland Resort.

Pandas are an endangered species, and only 1,864 still exist worldwide. Excluding China, 48 pandas live in 13 countries, including Japan, the United Kingdom and the United States.

The fanfare to host them is understandable, given that China popularly exercises what it refers to as “panda diplomacy” to foster good relations with other nations.

This is the second time China has presented Korea with a pair of pandas. Beijing gifted two bears to Korea in 1994, though Seoul was forced to return them four years later, when the Asian financial crisis hit.

Everland started attending to preparations to receive the pandas in 2014, when Xi and Park met for talks. That same year, the park was also recognized as an official panda-breeding institute, and in October 2014, Everland’s operator, Samsung C&T, signed an agreement with the China Wildlife Conservation Association to conduct joint panda research.

Ai Bao and Le Bao will live in Panda World, an Everland project in collaboration with Samsung Electronics and the German-based design company Dan Pearlman, which takes up 7,000 square meters.

Panda World will open to the public in April, in time for the resort’s 40th anniversary.