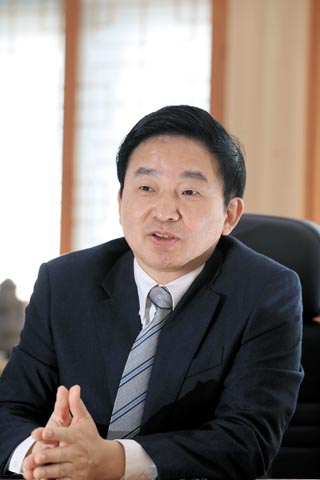 Won Hee-ryong, the governor of Jeju Special Self-Governing Province, has unveiled a package of measures that will allow Korea’s renowned resort island to compete with some of the world’s most luxurious tourist spots.

The move seeks to step up the quality of tourism on Jeju, which just marked 10 years as a special self-governing province.

During a recent interview with the JoongAng Ilbo at his office in Jeju City, Governor Won said he had been pushing for a sustainable development plan to transform Jeju Island into one of the most attractive and environmentally friendly cities, which included plans to boost the renewable energy business and restrict development on Mount Halla, the highest mountain in South Korea.

One of the highlights of his plan, he said, was to build a celebrity town - “star village” - similar to Miami, one of the most prominent U.S. coastal cities that has attracted scores of the rich and famous to its sunny shores.

A former prosecutor and three-term lawmaker, Won was elected governor in July 2014.

A Saenuri Party stalwart, he was born and raised on Jeju Island, and later went on to attend Seoul National University to study law.

Q. Jeju is largely considered a cheap travel destination. Do you have countermeasures for that?

A. We need to expand individual tourism. Because about 80 percent of domestic visitors come to Jeju individually, we solved many problems related to low-price tours. Jeju has to improve in quality in every aspect - food, entertainment, the service industry and our unique attractions. By utilizing wi-fi and the Internet of Things (IoT), we hope to increase access to nature, tourism assets, agricultural and fishery products and health care.

Following an increase in tourism, the employment rate went up, boosted by temporary workers in the construction and service sectors. However, that number alone doesn’t imply that it’s a favorable situation. How do you see it?

We adopted a program to connect foreign investment and employment. This is the first program of its kind to be introduced in Korea and requires at least 80 percent of employees working at a large-scale business site to be Jeju residents. Those employees will have the benefit of training overseas. This is a job creation model that starts with investment and ends with more jobs.

Do you have a plan to attract global celebrities?

Jeju’s competitors include Sardenha, an Italian island; Majorca, a Spanish resort island; and Miami. But the plan to attract celebrities is not based on the concept of beach villa towns. We have the infrastructure of a huge resort complex, electric cars and Jeju’s second international airport. That will draw celebrities to Jeju even if we don’t ask them to come.

SM Entertainment has shown interest in our plan to build a “star village” - a provisional name for the town - in Seogwipo, on the southwestern side of Jeju.

Why are you comparing those cities in particular?

In the planning process to become a luxury tourism destination, local residents have never been excluded. Jeju has the clean natural surroundings that Sardenha, Majorca and Miami have and functions as a bridge between China and Japan. Jeju could be a premium island, similar to Hong Kong and Singapore.

What kind of support is needed from the central government to develop Jeju?

When a plane takes off, it uses up most of its fuel. That means Jeju also needs financial support and creative autonomous rights to be able to compete with international cities. Ultimately, it’s possible Korea’s growth will be driven by Jeju.

What kind of support are you specifically asking for?

I asked President Park Geun-hye on Feb. 19 to minimize the period for an assessment review to build a second airport and to allocate 5 billion won ($4.1 million) to establish a basic development plan for the airport.

In addition, I asked the president to help build a complex transfer center to resolve traffic congestion problems at the current airport. I also told her to expand incentives on electric vehicles by designating Jeju a special electric car district.

How has the plan to make Jeju a “carbon-free island” been going?

In the future, Jeju will be a place where cars run on electricity generated from wind power. One consideration now is the installation of quick chargers in residential areas. We expect this distribution problem to be resolved by next year.

After adopting a special immigration policy for investors in February 2010, Jeju island has suffered from sprawling development and deforestation. What is the current situation like?

Under our guidance, we are strongly regulating business that threatens the environment. We will apply strict guidelines on development to maintain the value of the world’s greatest natural assets, which is Unesco designated. With enough funds, we would like to restore the coastal roads that have been covered by concrete.

Jeju has had problems recently with Chinese and Vietnamese national staying illegally. Do you have a solution for this?

We need a system that makes illegal stays impossible on Jeju, but at the same time, we have to actively welcome foreigners. In the Jeju Special Self-Governing Provincial Policy Agency, there is no foreign affairs division. There are many systems that are now experiencing a number of issues since we didn’t foresee such a large number of visitors. Tourism started to significantly grow in 2010.

Do you have measures in place to counteract soaring real estate prices?

We established a countermeasure headquarters in December to stabilize the price of land and property. This year’s key goal is to battle against soaring land prices. We are operating a report center to uncover real estate speculation to assess the exact conditions of the real estate market. We will execute stronger policies when we finalize the assessment.