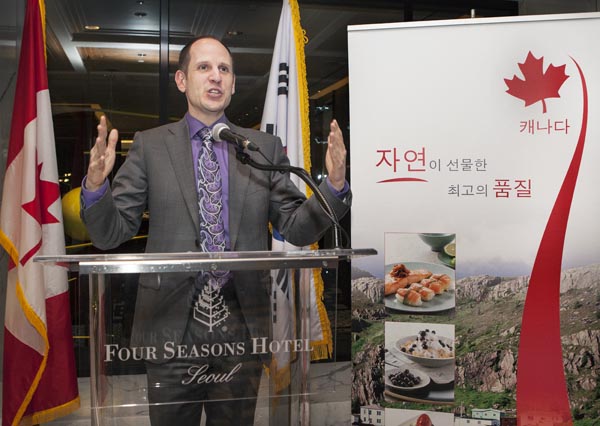 To celebrate the resumption of Canadian beef imports to Korea, the Canadian Embassy will promote some of the country’s local food items via an exclusive menu set at the Four Seasons Hotel in Jongno District, central Seoul.

The promotional event runs through March 12 at the hotel’s Market Kitchen and Market Larder restaurants.

The lunch and dinner menus, developed by a German chef at the hotel, include a range of dishes, including beef wellington, carpaccio, Thai salad, Canadian burgers, beef tataki, short ribs and wok-fried beef.

Visitors to Market Kitchen can win raffle prizes, which include a round-trip ticket to Vancouver, a two-night stay at the Four Seasons Hotel in Seoul, Canadian ice wine and an Arc’teryx jacket.

Canada’s week-long celebration comes with beef imports to the Korean market now restored, ending a temporary ban that was imposed over concerns about mad cow disease. Korea put the ban in place in February 2015, after a cow in Alberta was discovered infected.