Hyun to resign from board of troubled HMM

Hyun to resign from board of troubled HMM 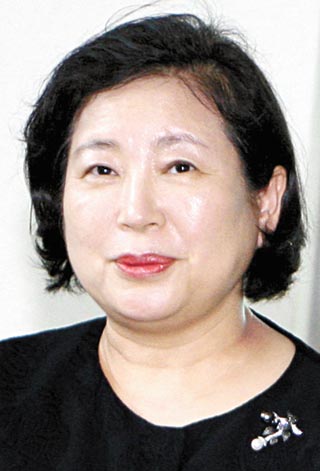 Hyundai Group Chairwoman Hyun Jeong-eun stepped down from the board of troubled Hyundai Merchant Marine (HMM) as part of efforts to get creditors to accept a restructuring plan and offer additional loans.

Hyun expressed her intention to resign from both the HMM board and as its chairwoman at a board meeting Thursday, but she remains a board member of other affiliates. The resignation will be finalized at a shareholders meeting scheduled for March 18.

HMM will also carry out a reverse stock split on some 229.5 billion shares in a bid to reduce the company’s capital, the company wrote in a public notice on the Financial Supervisory Service’s electronic notice system.

The measure is mainly aimed at keeping the company listed on the stock market, the group noted. In local capital market law, a company will be delisted from Seoul bourses if its impaired capital ratio - an indication of how much the company’s capital has fallen below zero - remains above 50 percent for two years or longer.

HMM will reduce its capital to 173.2 billion won ($144 million) from 1.2 trillion won as of April 21 to help improve its balance sheet, the company said in a regulatory filing on Thursday. It will seek approval from shareholders at a March 18 meeting.

After posting losses in five of the past seven years, HMM has been selling assets in an effort to reduce debt that amounted to almost 800 percent of its equity.

HMM received 100 billion won earlier this year, including 30 billion won from Chairwoman Hyun, to shore up its finances.

“In addition to Hyun’s restructuring plan last month, the group hopes to see shareholders approve the stock merger plan,” Hyundai Group wrote in a statement on Friday. “It will help further accelerate normalization of the group’s financial soundness.”

However, the group’s restructuring plan hasn’t satisfied the market or its creditors.

“The stock merger is a temporary remedy because HMM will soon face billions of won in corporate debt reaching maturity and the global shipping market is likely to stay gloomy throughout this year,” a senior analyst specializing in shippers told the Korea JoongAng Daily in a phone interview on Friday. “Because HMM doesn’t have cash and the global container ship market is still suffering, it can’t even bet on future business.”

Thursday’s decision signals that Chairwoman Hyun has lost leadership of the group, the analyst said, though she remains a board member of other affiliates.

A more extensive restructuring plan will probably be demanded of HMM, the analyst added.

Some industry insiders say a merger with the equally troubled Hanjin Shipping could be a possible solution.