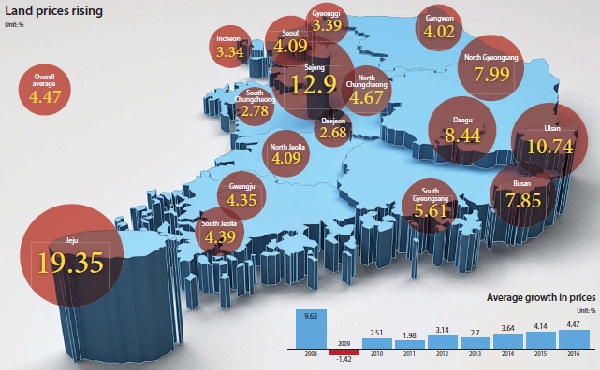 Land prices grew at the fastest pace in eight years in the past 12 months, largely because of the establishment of so-called innovation cities as well as newly constructed subway lines.

According to the Ministry of Land, Infrastructure and Transport, the assessed value of land grew 4.47 percent on average compared to a year earlier. That is the biggest yearly hike since 9.63 percent in 2008. There were no areas that saw drops in land prices.

The Land Ministry announces the standard assessed land values, which are used for tax purposes, in late February.

The construction of new cities and major infrastructure projects like expressways and subways contributed to the growth in land prices. 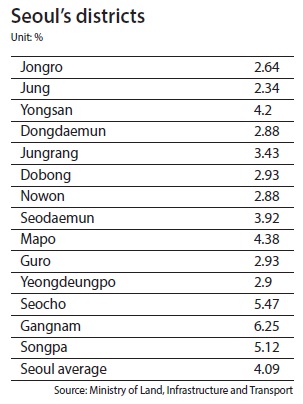 Among 17 major cities and provinces, Jeju saw the biggest hike, 19.35 percent from a year earlier. Sejong City, which took the No. 1 spot last year, came in second after its land values rose 12.9 percent. Sejong continues to enjoy rises because its basic infrastructure and living conditions are steadily improving as public institutions relocate to the country’s new administrative capital.

Ulsan took third place, with land prices rising 10.74 percent. An innovative city development project is gaining momentum. In addition, after the Ulsan bridge was completed last year, there has been an influx of tourists.

The region that saw the least change was Deokyang District in Goyang, Gyeonggi. Land values rose only 0.47 percent year on year. The second-lowest increase was Gyeryong, South Chungcheong, with 1.03 percent. Paldal District in Suwon came in third (1.1 percent) followed by Yangju (1.17 percent) and Gyeonggi (1.21 percent).

Common traits of neighborhoods with flat land prices include aging buildings and a dearth of major development projects.

Seoul’s land values rose thanks to major development projects, including the ongoing construction of Lotte’s skyscraper in Jamsil. But its year-on-year growth of 4.09 percent was slower than the nation’s average. The situation in Gyeonggi was similar, as land prices only grew 3.39 percent despite several development projects, including the construction of the Dongtan 2 New City and a second ring road around the greater Seoul area.

Its average growth was dented after development projects in the northwestern region struggled to get off the ground.

Incheon’s prices grew at a slower pace than Seoul and Gyeonggi, registering 3.34 percent. Dokdo land prices surged 17.95 percent thanks to increased investment to preserve the natural state of the islets.

Among districts in Seoul, Itaewon, with its foreign population and buzzing restaurant scene, saw the sharpest year-on-year growth of 7.55 percent.

Hongdae, a bohemian neighborhood with art schools and night clubs, was the second fastest, growing at 5.81 percent. Gangnam Station came in third with 5.08 percent, and Garosu-gil in Sinsa-dong took the fifth spot with 4.74 percent.

By value, Seoul had the most expensive land on average - a square-meter area was worth 4.01 million won ($3,300). Incheon took second place but was only one-eighth the value of land in Seoul. A square meter in Incheon is worth only 516,091 won.

Busan was the third most expensive, with an average price of 382,785 won, while Gyeonggi and Daejeon took the remaining spots in the top five, as their land value on average exceeded 200,000 won.

Jeju’s land value saw the sharpest growth, with each square meter now worth 61,196 won. The national average was 137,348 won.

The most expensive private land in the country was a cosmetics store in the heart of Myeong-dong, central Seoul. The Nature Republic building has kept its No. 1 spot for the last 13 years. One square meter of land at the cosmetics store is worth 83.1 million won, which is 2.4 million won more than a year ago.

All the top 10 most expensive plots in the country are located in Myeong-dong. Most of them are banks, fashion outlets and cosmetics stores.

The cheapest land in the country was a forest in Daeseong-ri in Gimcheon, North Gyeongsang. The land’s value was only 160 won per square meter, just 15 won more than last year.

Land owners who disagree with preliminary assessments by the government can file complaints to their local governments or on the Land Ministry website until March 24.