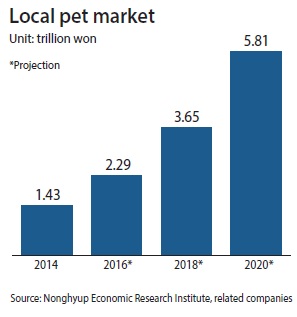 Kim Yu-jeong, a 33-year-old housewife living in Seoul, visited a pet store near her apartment for a photo portrait session with her cat Doli. She purchased 50 digital images and two prints for 50,000 won ($40).

“I wasn’t sure whether my cat would pose in front of the camera, but the photographer was very skillful at making my cat move the way he wanted,” a satisfied Kim said.

A whole new industry involving pets, and goods and services for them, has arisen in Korea. Boosters go so far as to call it the pet economy. It’s all based on a growing love of pets in Korea. Currently, some 10 million people own pets.

Some manufacturers are selling handmade food for pets. They emphasize that their products are organic and much better for animals than the stuff mass-produced in factories.

The shop offered such exotic pet treats as handmade duck breast jerky for 6,000 won and beef jerky for 7,400 won. A chewing stick for dogs made out of deer antler costs 14,000 won.

“Products that are more expensive than a meal for an office worker are selling very well,” a worker at the shop said. “We allow pets to come into the store in order to attract more customers with pets.”

In the fourth quarter of last year, e-commerce giant Interpark has seen sales of health supplements grow 364 percent for dogs and 86 percent for cats.

Household goods for pets are also popular - and pricey. Pet lovers can buy a full set of household goods, including a dog house with cabinets for 150,000 won. There is an indoor playground for cats called “Premium Cat Tower” that sells for 300,000 won.

The growth of the industry is related to Korea’s low birthrate and growing number of single households. A total of 430,000 new babies were born last year, only half the 860,000 born in 1981, according to Statistics Korea.

The share of single households also rose 14 percentage points over 20 years to 27 percent of the total population last year. Many people who don’t have kids and live on their own are now adopting pets.

“People spend more free time with their pets and spend money to show off their pets to others,” said Kwak Keum-joo, a psychology professor at Seoul National University.

Households with pets spent an average of 145,632 won per month on them, according to Korea Consumer Agency data from 2014. Japan, which has very similar demographics as Korea, has seen its market size for pets reach 14 trillion won.

Large discount stores have made special sections in their stores to sell pet products and also allow customers to drop off pets while they shop. E-Mart operates Molly’s Pet Shop, and Homeplus offers such services at its “I love pet” store.

Some local companies are offering pet funeral services for 300,000 won to 800,000 won each. Seoul National University decided to dedicate radiation machines for veterinarians this year.

Some warn that high prices don’t guarantee the right product for a pet. “Some of the high-priced foods have more fat and could cause obesity,” said Yoon Shin-geun, head of the Korea Animal Protection Research Center.