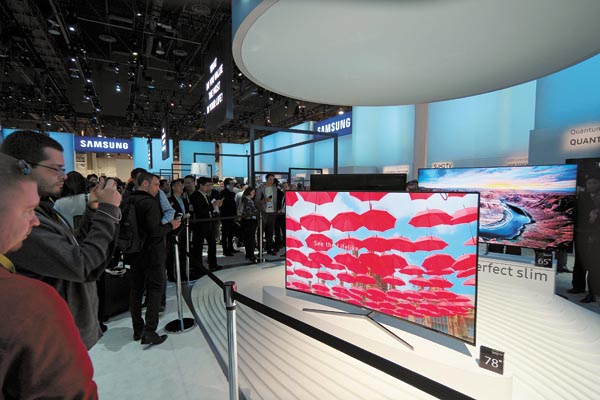 Visitors check out a 78-inch SUHD television by Samsung Electronics at the 2016 Consumer Electronics Show in Las Vegas. [SAMSUNG ELECTRONICS]

With the arrival of Internet protocol television (IPTV), people can now instantly access everything from recent TV shows to blockbuster movies.

But as a film and drama buff, Kim Jeong-ah, 31, was not fully satisfied. The stay-at-home mom wanted a big-screen TV to turn her house into a home theater.

She found that prices of 65-inch televisions had been lowered to a level comparable to 40-inch products five years ago.

“I paid around 2 million won [$1,660], which was not cheap but still affordable, given it was far beyond the 3 million won a few years ago,” she said, “And the big TV is more immersive and comes with a fantastic sound system as well.” 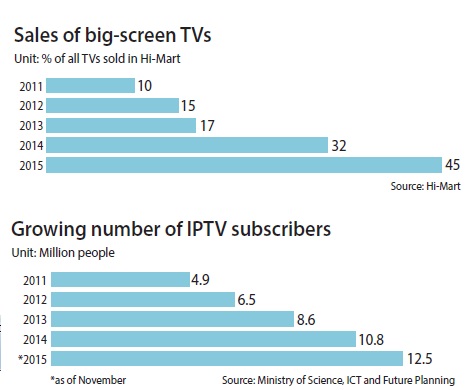 Big-screen televisions were once reserved for only the affluent, but they have recently become more commonplace in ordinary households due to the falling prices of liquid crystal displays (LCD) and increasing demand for the products

Hi-Mart, the country’s largest electronics store chain, said on Friday that sales of TVs with displays larger than 55 inches accounted for just 10 percent of their total three years ago but increased to 45 percent last year.

“As the services for on-demand movies and TV shows are widely available, a growing number of consumers want to enjoy the content on large premium TVs,” said Choi Doo-hwan, head of the consumer electronics division at Hi-Mart.

Of the total sales of big-screen TVs, 80 percent fall into one of the three categories, according to Hi-Mart.

The key factor driving the popularity is the low prices, which is being made possible by falling LCD prices thanks to an oversupply by Chinese manufacturers.

“Consumers can buy big TVs at far lower prices than just as features have greatly advanced thanks to improved technology,” said Park Jong-hyuk, a spokesperson at Samsung Electronics, the world’s largest TV maker.

Only three years ago, a 55-inch Samsung LED TV would typically run near 3 million won, but that same model would now cost near 1 million won, Hi-Mart said.

Samsung Electronics has particularly benefitted from the growing demand for high-end TVs.

Domestic sales of the company’s 55-inch models increased by some 60 percent last year compared to 2014, while sales of TVs larger than 60 inches surged by 70 percent, according to multiple local media reports.

Sales are likely to increase further thanks to the government’s removal of the individual consumption tax on big-screen TVs, which went into effect at the beginning of this year.

The growing number of IPTV subscribers is also behind the sales increases.

As telecom providers such as KT and SK Telecom have provided IPTV services bundled with landline and wireless Internet services, IPTV has entered into the mainstream.

One-fifth of Korea’s population, or 12.5 million people, were subscribed to an IPTV service as of last year, according to research jointly conducted by the Ministry of Science, ICT and Future Planning and the Korea Association for ICT Promotion. The figure represents a 16.8 percent increase from the previous year.

LG Electronics, the world’s second-largest TV manufacturer, has said it is focused on creating big-screen OLED TVs and has invested big in the product category.

A series of news reports said Samsung would follow suit, but the company denied the claims.

“The reports are groundless, as we are concentrating resources on manufacturing the large-size quantum-dot TVs that are doing well in both the domestic and overseas markets,” Park said.