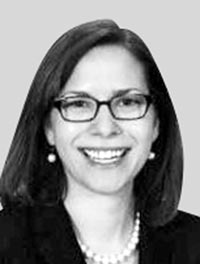 Laura Rosenberger, foreign policy adviser for Hillary Clinton, spoke about Clinton’s policies and her stances on North Korea, the Islamic State (ISIS), the U.S.-Korea alliance and Korean-Americans in an exclusive interview with the JoongAng Ilbo on Monday.

Rosenberger has been Clinton’s foreign policy adviser since July 2015, but her history with the U.S. State Department dates back to 2004, when she worked as a foreign affairs officer in the Office of Korean Affairs for five years. Rosenberger is familiar with the workings of the National Security Council after serving the council as the director for China and Korea from 2012 to 2013.

Diplomatic sources say Rosenberger may be a top Asia affairs expert in the White House if Clinton is elected.

The following are excerpts from the email interview.

Q. North Korea recently launched a supposed satellite into orbit on a long-range missile. What is Clinton’s strategy when it comes to North Korea?

A. North Korea’s nuclear and missile tests, its human rights record, its cyber hacking activities - all highlight the continuing threat that it poses. As secretary of state, Hillary championed the United States’ pivot to the Asia-Pacific in part to confront threats like North Korea and to support our allies. And she worked to get not just our allies but also Russia and China on board for the strongest sanctions yet.

Hillary condemned the recent nuclear test as a provocative and dangerous act, and believes North Korea’s goal is to blackmail the world into easing the pressure on it. We can’t give in to or in any way encourage this kind of bullying. Instead, we should increase pressure and send Pyongyang an unmistakable message that its nuclear brinkmanship won’t succeed.

The alliance between the United States and South Korea has lasted for decades. Does Clinton have any plans to strengthen the U.S.-South Korea alliance if she were to be elected president?

The U.S.-South Korea alliance has been a key part of maintaining peace and stability in Asia, and Hillary has been instrumental in forging an even closer partnership. As president, Hillary will partner with the people of South Korea in standing up to and defending against the North, as our two countries have stood together for more than 60 years, with the ultimate goal of one day realizing a peaceful, denuclearized and reunified Korean Peninsula.

Hillary knows that our nation’s diversity is one of its greatest strengths, and she believes Korean-Americans have contributed significantly to the economic, social and cultural life of the United States. She has put forward a number of policies that will directly benefit the Korean-American community, including fighting for small businesses, strengthening Social Security, Medicare and the Affordable Care Act, standing up for voting rights, and supporting women’s rights and opportunities. Hillary is also an outspoken advocate for comprehensive and compassionate immigration reform.

Hillary Clinton has put herself forward as a “champion for everyday Americans” in her campaign. Could you explain more the rationale behind the slogan?

Americans have fought their way back from very tough times, but the deck is still stacked in favor of those at the top. Hillary’s campaign is about breaking down barriers - of students who are saddled with college debt, parents that are juggling the responsibilities of multiple jobs, raising children and just trying to make ends meet, and seniors that must choose between paying their rent or paying for their prescription medicine. These hardworking, everyday Americans need a champion that will break down all the barriers that are holding them back.

What are some of Hillary’s strategies to protect America from terrorist groups such as ISIS?

Hillary has laid out a comprehensive strategy for defeating ISIS and the scourge of radical jihadism. Her strategy hinges on three main elements - defeating ISIS in Syria, Iraq and the Middle East; disrupting and dismantling the growing terrorist infrastructure that facilitates the fighters, fighting, arms and propaganda around the world; and defending the homeland.