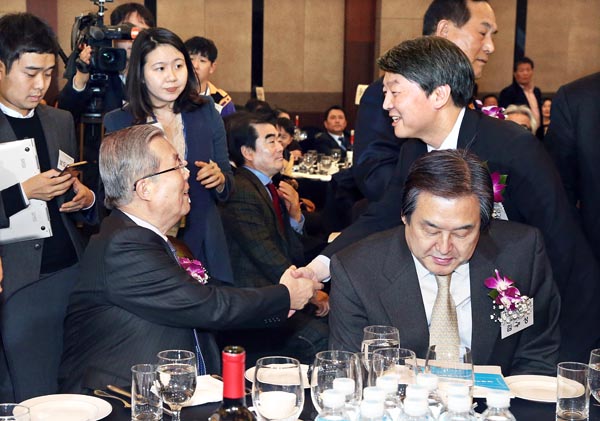 Kim Chong-in, left, the interim leader of the main opposition Minjoo Party of Korea, shakes hands with Ahn Cheol-soo, right, co-chairman of the minor opposition People’s Party, at a general meeting with officials from the Honam region at the Prima Hotel in Cheongdam-dong, southern Seoul. Kim proposed a merger with Ahn’s party, which he flatly rejected. Pictured in front of Ahn is ruling Saenuri Party Chairman Kim Moo-sung. [KIM SANG-SEON]

The minor opposition People’s Party conducted meeting after meeting on Friday to discuss the proposal for a political merger offered by the main opposition Minjoo Party of Korea.

People’s Party co-chairmen Ahn Cheol-soo and Chun Jung-bae held an hourlong meeting with Kim Han-gill, the interim co-leader of the party’s election committee, starting at 7 a.m., but failed to come to an agreement.

And when no lawmakers came forward with a statement during the election committee meeting at 9 a.m., talks moved behind closed doors. The committee ultimately decided to gather Supreme Council members and senior lawmakers for another meeting at a 8 p.m. on Friday to make a decision on the merger offer, though details were not available as of press time.

In case the merger issue is not resolved then, the Supreme Council was scheduled to convene at 9 p.m. for discussion.

The Supreme Council of the People’s Party has the right to decide on merger proposals, according to its constitution.

Kim Chong-in, interim leader of the Minjoo Party, extended the offer to the party for a merger on Wednesday.

“A breakup of the opposition has a critical influence on the outcome of the general election,” he said at the time. “The ruling party now has the leeway to win the election, and if the People’s Party is fine with that, then there is nothing more that can be done.

“Opposition solidarity can be achieved without a merger, if enough members rejoin [the Minjoo Party],” he added.

Ahn on Friday reiterated his stance against the merger. “Nothing in my position has changed from yesterday,” he said.

He went on to criticize the proposal on Thursday in Busan as “a nasty political maneuver to stop the People’s Party from becoming a strong third party.”

“I will never give up, and I will change the old way of politics,” he said.

Yet, his fellow party members remained divided on the issue.

“I have no personal stance here,” Chun said. “I will follow the decision from the meeting.”

Some, however, remained in strong solidarity with Ahn.

“If Rep. Ahn says no, then there is nothing more to talk about,” said Rep. Lee Tae-gyu, the party’s strategy director.

But there were lawmakers who appeared to consider opposition solidarity as a viable option for the April 13 general election.

“[Considering a merger with the Minjoo Party would be] like preparing a funeral for a toddler who just started to walk,” said Park Joo-sun, member of the party’s Supreme Council. “But when the general election approaches, I think the opposition candidates from some regions will have no choice but to band together.”

The ruling Saenuri Party has criticized the Minjoo Party’s offer for a merger, calling it a political scheme to isolate Ahn Cheol-soo. “The opposition is so desperate to win seats at the National Assembly that they really don’t care about the public’s welfare,” said Won Yoo-chul, the Saenuri Party floor leader.