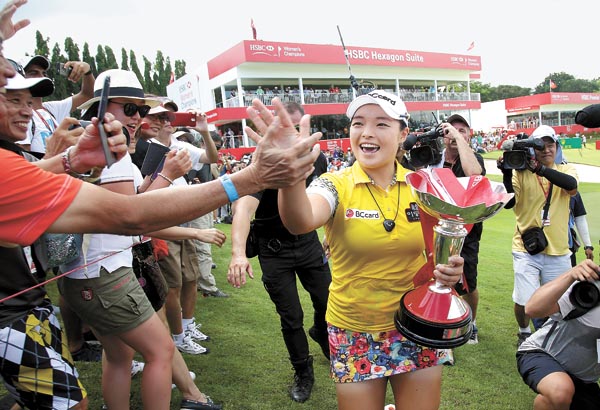 South Korean golfer Jang Ha-ha celebrates with her fans after claiming her second title of this season when she won the HSBC Women’s Championship at Sentosa Golf Club in Singapore yesterday. The 23-year-old shot a bogey-free third round and went into the final round with the record of 12-under 204 aggregate, leading the standings by one shot ahead of Pornanong Phatlum of Thailand’s. In the fourth round, Jang carded one eagle, six birdies and one bogey to wrap up the round at 7-under 65 to clinch the title with the final record of 19-under 269. Meanwhile, Jang’s compatriot Yang Amy placed third at 11-under, followed by Choi Na-yeon, Choi Chella and Lee Miriam who were tied in fourth at 10-under in the HSBC Women’s Championship. [AP/NEWSIS]