Pat Conroy, author of ‘The Prince of Tides,’ dies at 70

Pat Conroy, author of ‘The Prince of Tides,’ dies at 70 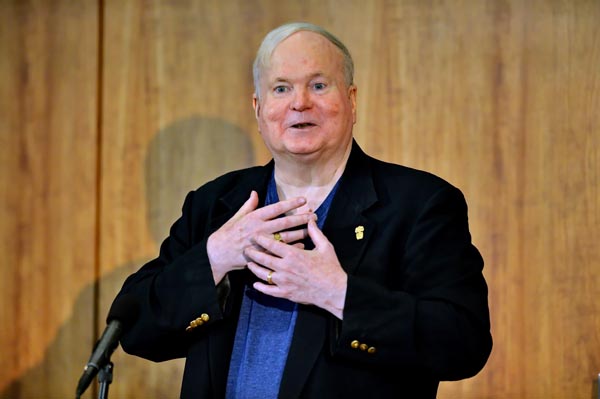 Author Pat Conroy speaks to a crowd during a ceremony at the Hollings Library in Columbia, South Carolina, in May 2014. Conroy has died at age 70. [AP/NEWSIS]

CHARLESTON, South Carolina - Author Pat Conroy, whose beloved works “The Great Santini” and “The Prince of Tides” are set against the vistas of the South Carolina coast that was his home, was lauded Saturday as a great chronicler of the human condition and a humble and loving soul.

Conroy, 70, died Friday at his home in Beaufort, about an hour south of Charleston, surrounded by family and friends at the time, according to his publisher.

The heavy-set author died less than a month after announcing on Facebook that he was battling cancer. He promised to “fight it hard” and told his fans “I owe you a novel and I intend to deliver it.”

A funeral mass will be held Tuesday at Saint Peter’s Catholic Church in Beaufort with a private burial afterward.

Barbra Streisand, who starred in and directed the movie version of Conroy’s “The Prince of Tides” posted a picture of herself with Conroy on Instagram on Saturday. The 1991 movie starring Streisand and Nick Nolte earned seven Oscar nominations, including best picture.

“He was generous and kind, humble and loving . such a joy to work with. I was so honored that he entrusted his beautiful book to me,” she wrote. “Pat’s natural language was poetry.he wrote sentences that are like an incantation.”

While Conroy had been ill in recent weeks, last October the University of South Carolina Beaufort held a three-day literary festival featuring Conroy and discussions of his work and included a screening of “The Great Santini.” The event culminated with a 70th birthday party in his honor.

“The water is wide and he has now passed over,” his wife, novelist Cassandra Conroy, said in a statement from publisher Doubleday.

Nan A. Talese, Conroy’s longtime editor and publisher, said that the late author “will be cherished as one of America’s favorite and best-selling writers, and I will miss him terribly.”

Charleston Mayor John Tecklenburg, who had known Conroy most of his adult life called him “the great chronicler of the time and place that I call home. He saw it with clarity. He wrote of it with purpose.”

Conroy, who sold 20 million books worldwide, candidly and expansively shared details of growing up as a military brat and his anguished relationship with his abusive father, Marine aviator and military hero Donald Conroy. He also wrote of his time in military school, The Citadel in Charleston, and his struggles with his health and depression.

Much of his youth was spent in the shadow of Donald Conroy, who “thundered out of the sky in black-winged fighter planes, every inch of him a god of war,” as Pat Conroy would remember. The author was the eldest of seven children in a family constantly moving from base to base, a life described in “The Great Santini,” the film of which starred Robert Duvall as the relentless and violent patriarch.

The 1976 novel initially enraged Conroy’s family, but the movie three years later made such an impression on his father that he claimed credit for boosting Duvall’s career. The book also helped achieve peace between father and son.

“I grew up hating my father,” Conroy said after his father died in 1998. “It was the great surprise of my life, after the book came out, what an extraordinary man had raised me.” He would reflect on his relationship with his father in the 2013 memoir “The Death of Santini.”

“The Prince of Tides,” published in 1986, brought Conroy a wide audience, selling more than 5 million copies with its story of a former football player from South Carolina with a traumatic past and the New York psychiatrist who attempts to help him.