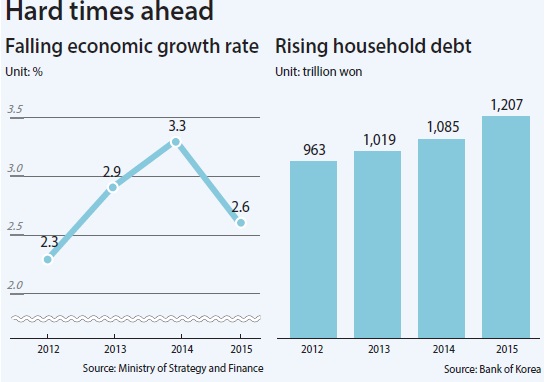 Every floor of the NC Department Store in Jamsil-dong, southern Seoul, was packed with customers frantically digging through piles of clothes and shoes on March 1.

The moment an employee set out pairs of Nike sneakers at 50 percent off the retail price, men and women alike snatched them off the shelves. There was even a scuffle when several buyers grabbed the same item simultaneously.

“We ran out of boxed tissues by 3 p.m.,” a saleswoman said. “As they were crazy cheap, people took several boxes at once.”

On the Internet communities for Jamsil residents, members warned the neighborhood had turned into a mad house and said it would take at least an hour just to find parking.

The chaotic scene has been happening every Independence Movement Day since the retailer started its event several years ago, offering everything from food to fashion at discounts of up to 80 percent.

While the rest of the country took the day off to remember the independence movement during the Japanese colonial period, NC Department Store was packed with shoppers elbowing each other out of the way to snag the best bargain.

But this year, shoppers seemed a little more desperate to save money.

“I’m not really a person who is attracted to sales, but recently, I’ve been changing the way I’ve been spending because the economic situation is becoming more uncertain,” said Song, 42, who was digging through a steeply discounted pile of Nautica outdoors pants. “My wife and I both work so we’re better off than some other households. But even with our income, after paying the interest on our loans, living expenses and for our kids’ education, there’s hardly any left for saving.”

The average household today is jittery and increasingly less confident about the path of the Korean economy, particularly as various indicators including exports, industrial output, unemployment and household loans have been alarming.

The frozen stock and real estate markets are causing household income to shrink just as ever-growing household loans, which reached more than 1,200 trillion won ($996 billion) by the end of last year, are applying more pressure on Korean families.

With less income and more uncertainty about the nation’s economy, many consumers are shopping online rather than at discount stores like E-Mart or Lotte Mart.

Online shopping is currently a 5 trillion won market, accounting for 17.2 percent of overall retail sales, at 30 trillion won. That’s 2.4 percent larger than a year ago.

Why is online shopping growing so fast? One reason is because it offers products at lower prices while being more convenient.

More shoppers are buying their groceries online, with sales of agricultural and marine products surging 57.6 percent in just a year. Online sales of processed food and beverages have seen exceptional growth of 43.2 percent.

But consumers are also heading online because living conditions for the average household have worsened over the last few years.

According to a recent study by Statistics Korea, the gap between the monthly paychecks of people working for small and midsize companies and those working at conglomerates is wider than it has ever been.

The average paycheck received by employees at companies with more than 300 employees, categorized as a conglomerate, reached 5.01 million won last year, an increase of 3.9 percent year on year. 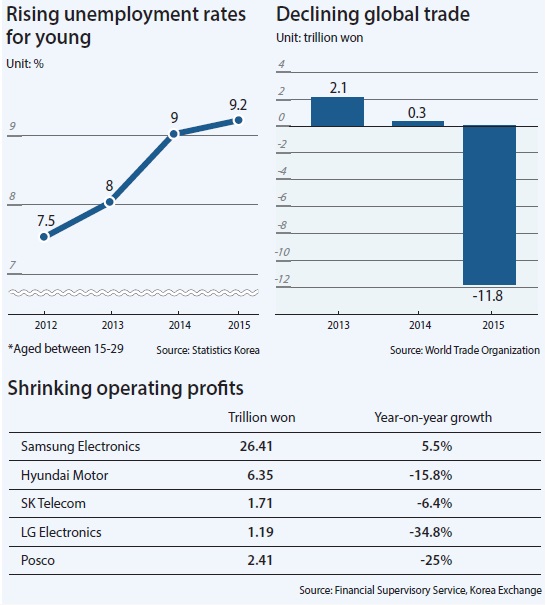 Over the same period, the average paycheck taken home by people at small and medium-size companies (between five and 299 employees) grew 3.4 percent to 3.11 million won. That’s just 62.3 percent of the salary received by their conglomerate counterparts.

“This year, it is difficult to expect the domestic market to recover from policy implementation,” said Lee Geun-tae, senior analyst at LG Economic Research Institute.

“Since the second half of last year, household spending has been falling to all-time lows as uncertainties over the economic future have gone up.”

Lee added that the frozen property market, in which many older people have invested to sustain their life after retirement, as well as low interest returns on financial assets have dampened spending confidence. Growing unemployment faced by young people is also contributing to further cutbacks on spending.

Even the nation’s top companies are feeling a squeeze. Last year, Hyundai Motor recorded its highest-ever annual revenue at nearly 92 trillion won. But the company was only able to earn 6.35 trillion won in operating profit, which is the smallest since 2010 and 15.8 percent less than the previous year. It was the third consecutive year that operating profit has shrunk.

The situation at other companies is similar. Samsung Electronics enjoyed an annual operating profit increase of 5.5 percent to 26.4 trillion won. But when looking solely at the fourth quarter, operating profit actually declined compared to the third quarter.

Market experts are particularly worried by the fact that leading manufacturers, which should be leading the country out of the gloom, are themselves struggling.

The current situation is unlikely to improve anytime soon as China, which accounts for one quarter of Korea’s economy, has already seen its growth fall below 7 percent.

“New government stimulus efforts are likely to take effect starting in the second quarter, but their impact is not expected to be strong enough to offset the slowdown in exports,” said Suh Dae-il, an analyst at Daewoo Securities. “In particular, tighter control on bank lending is anticipated to erode the impact of any stimulus. February readings of the consumer sentiment index and the business sentiment index suggest that consumers’ expectations for housing price growth are sliding sharply, and that corporate financial conditions have deteriorated from the levels seen in the second half of 2015.

“As the Korean economy is expected to continue to slow down in first half of this year, we believe that additional stimulus measures, including a base rate cut, will be needed going forward.”

“There are concerns that the uncertainties [shrinking exports, consumption and even investment] regarding the local economy could result in contraction,” Yoo said during a meeting of economic ministers held at the government complex in central Seoul on Thursday. “[However] when you exclude automobile sales, overall sales are increasing, and as the lowering of the individual consumption tax was back in February, the situation will gradually improve.

“Exports also fell less in February than in January and actually rose by volume.”

The minister said that although he is aware of the growing concerns, he does not see the need yet to consider measures like a supplementary budget.