Global companies see AI as the next frontier

Global companies see AI as the next frontier

A new program developed by Microsoft analyzes a person’s face and represents their emotional state in numbers.

Communicating through the face of a 17-year-old girl, Xiaobing reported, “Don’t make appointments because the city will be covered with smog.” Xiaobing could analyze real-time weather data and even make small talk with the show’s news anchor.

Watson works by analyzing clinical data input by the medical team, which it turns into a report on a patient’s status that includes evidence-based treatment suggestions. “Watson’s capability to analyze huge volumes of data and reduce it down to critical decision points is absolutely essential to improve our ability to deliver effective therapies and disseminate them to the world,” Dr. Craig Thompson, president and CEO of Memorial Sloan Kettering, said in a statement.

Right:AI applied to an autonomous car distinguishes a variety of cars, humans and traffic signals. The picture is Nvidia’s Drive PX 2. Left: Google’s image recognition translation technology directly translates text by displaying an image on a smartphone. AI distinguishes text from the image and translates them. [JOONGANG PHOTO]

The battle between global IT companies to dominate the AI sector has begun and is getting ever fiercer. Everyone from American giants like Apple, Microsoft, Qualcomm, Tesla and Uber to Japan’s Toyota and China’s Baidu are snapping up promising venture companies and hiring outstanding talent.

Google plans to include its own chatbot in the company’s forthcoming mobile messenger. The program, short for “chatting robot,” answers users’ questions based on data analysis. For example, when a user tells it, “I want to eat something yummy,” the chatbot can give customized restaurant recommendations based on his or her past search records.

“Google would steer users to specific chatbots, much as its search engine directs users to relevant websites,” the Wall Street Journal wrote in December. “The move is strategic, because messaging apps and chatbots threaten Google’s role as the Internet’s premier discovery engine.”

Facebook CEO Mark Zuckerberg has said his goal for 2016 is “to build a simple AI - like Jarvis from Iron Man.”

“Many different problems can be reduced to pattern recognition tasks that sophisticated AIs can then solve,” Zuckerberg wrote in a note published on his own Facebook account. “This year, I’ll teach my simple AI to … recognize my voice so I can control my home through speaking [and] … to recognize my face so it can open the door when I’m approaching, and so on.”

While the research and development of AI has been secretive in the past, major IT companies have recently become more open to sharing their software for free with the public. The companies are hoping to win influence in the market by expanding their own AI ecosystems, thereby making their technology the global standard. That technology can also serve as a kind of beacon to draw top minds that might eventually work for the companies.

Competition is fierce because of the broad applicability of AI technology.

Consciously or not, most people already rely on some sort of AI in their everyday lives. Everything from predictive SMS messaging and scheduling management to financial management services use it, not to mention the oft-touted future economic growth engines like smart cars, robots and Internet of Things (IoT) technology.

As AI develops further, computer keyboards could become obsolete, replaced by advanced voice recognition technology. Automatic translation services could make the need to memorize languages a thing of the past.

Google’s instant camera translation technology already enables users to translate things like street signs and menus by opening a smartphone app and pointing the phone’s camera at the text, demonstrating an ability to distinguish between words and images.

Microsoft has a program that can identify eight different emotions - anger, contempt, fear, disgust, happiness, neutral, sadness and surprise - by scanning people’s faces in photographs. Companies can use the technology at product launch events to determine whether or not customers actually liked the new release. 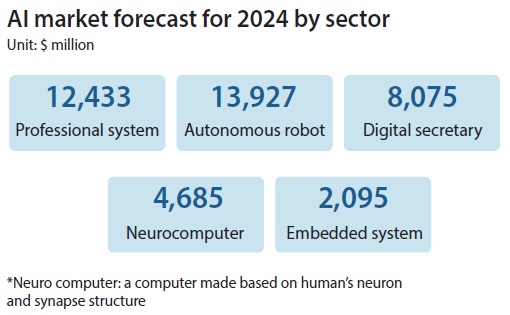 There are also “roboadvisers” who consult with customers about asset management. Experts forecast that by 2020, AI will be managing up to $2 trillion in assets.

Korea, however, has not been aggressive in its development of the AI sector. According to the Korea Evaluation Institute of Industrial Technology, if the United States’ level of AI development is 100, Korea stands at just 73.1. This is 10 points behind Europe (85.7) and Japan (83.7).

As a result, the nation could be in danger of offering up the domestic market to foreign companies before native AI technology can put up a fight.

“Korea used to lag in the health care and financial technology sector, but we have caught up fast thanks to increasing investment,” said Prof. Lee Kyoung-jun of Kyunghee University’s business department. “We need to secure our competitiveness by focusing our investments on industry-specific AI development.”

Despite the lag, Korean companies are getting ready to compete with foreign giants. Samsung is developing a new IoT platform that will provide consumers with appropriate solutions before they ask for it by analyzing their needs through AI. The electronics company is also investing more in AI-focused start-ups.

“We are basically researching every application of AI,” said Lee Geun-bae, executive director at the joint research center of Samsung Electronics and Seoul National University.

Domestic companies such as SK Telecom, Naver, Kakao and NCSoft are also speeding up their development of AI-related services including voice recognition, games, search and translation.

“Korea is behind in technological development and platform domination, but we still have the ability to closely follow the major pioneers in the industry,” said Prof. Song Dae-gene of Chungbuk National University’s management information systems department. “With the nation’s unique ‘fast follower’ strategy, Korea may well catch up with the market trends and then take the lead.”