Ahn rejects electoral alliance with the Minjoo in capital region

Ahn rejects electoral alliance with the Minjoo in capital region 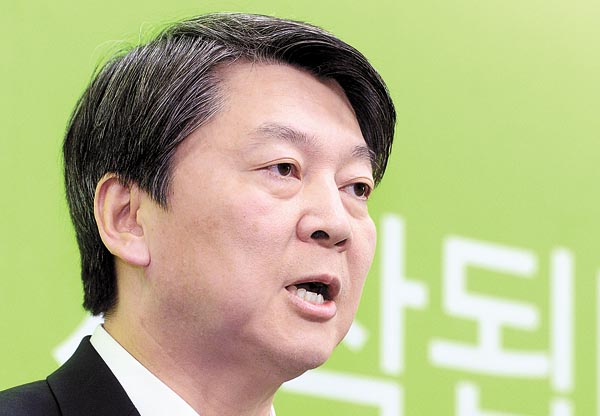 Ahn Cheol-soo, co-chairman of the newly formed People’s Party, quashed any possibility of an electoral alliance in the capital region with the main opposition the Minjoo Party of Korea ahead of the April general election.

On Sunday, Ahn also reiterated his rejection of a merger proposal by the Minjoo Party, declaring solemnly at a press conference that if he were to die, he would die a People’s Party member.

The announcement came as rumors swirled over the weekend that Ahn might succumb to the Minjoo Party’s offer of a political remarriage, made recently by Kim Chong-in, the interim leader of the main opposition bloc.

Kim made a formal proposal last Wednesday, inviting politicians who abandoned the Minjoo Party to return. Multiple sources from the People’s Party said some members were already swayed.

Ahn himself defected from the Minjoo Party late last year amid a break with then-Chairman Moon Jae-in.

“Everyone could die in the vast wilderness,” Ahn said Sunday morning at the party headquarters in Mapo District, western Seoul.

“But that’s fine,” he added, referring to what would happen if the two opposition parties continue on their separate ways.

As if to imply that his fellow party members were backing his firm stance, Ahn was quick to add that they, too, “expressed their strong will” not to unite with the Minjoo Party last Friday during a series of internal meetings.

“[My colleagues] told me that it was more important to make political change rather than get reelected as a lawmaker, and that if they were to die, they would do so within the People’s Party,” Ahn said. He also said many of the People’s Party lawmakers representing the capital region agree there should be no electoral alliance to unite liberal votes.

While Ahn hinted that the other members of his party were in line with his decision not to merge with the main opposition party, it remains to be seen whether anyone will openly object.

The JoongAng Ilbo surveyed all 18 lawmakers of the People’s Party on Wednesday evening, the day the proposal was first made, and only four representatives including Ahn said they opposed the merger.

Rep. Chung Jung-bae, a co-chairman of the People’s Party, and Rep. Kim Han-gil, the party’s chief campaign manager, answered that they would consider the possibility.

Although Chung did not make any explicit statements on the matter Sunday, the former head of the Ministry of Justice hinted at a separate function that he could be turning away from Ahn.

“The main goal of the People’s Party is to block the Saenuri Party from winning in the [April general elections],” said Chung. “We need to fully negotiate among ourselves how we’re going to fulfill this objective.”

However, that political outlook varied from that of Ahn, who said the same day that his party’s ultimate goal was to “demolish [Korea’s] two-party system.”

Kim Chong-in, interim leader of the Minjoo Party who initially made the merger offer, responded to Ahn’s refusal later on Sunday by telling a group of reporters that he personally thought Ahn seemed to be losing control by using such an “extreme word choice” of death.

Since December, more than a dozen lawmakers left the Minjoo Party to protest the leadership capabilities of its chairman at the time, Moon Jae-in. Moon was defeated in the 2012 presidential race by President Park Geun-hye and went on to get elected as chairman of the main opposition party in February 2015.