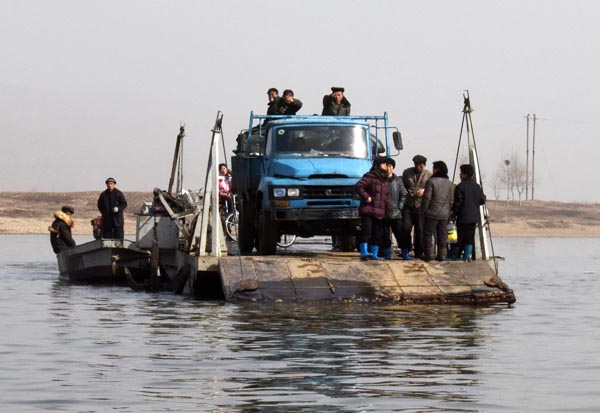 North Korean residents move goods from China by sailing the Yalu River at the North-China border from Dandong, Liaoning Province, China, on Sunday. With China’s backing, the United Nations Security Council approved last week newer and stronger sanctions on the North to punish its latest nuclear and missile tests. [NEWSIS]

A symbolic railway project involving the two Koreas and Russia may face an additional unilateral sanction being proposed against Pyongyang, the South’s Foreign Affairs Minister Yun Byung-se said on Sunday.

While remaining vague on whether the South Korean government is willing to step away from the trilateral economic deal, Yun said during an interview on an MBC talk show that negotiations over the matter with Moscow will “begin soon.”

Yun did not elaborate or discuss a time frame.

The Rajin-Khasan Project is a three-way economic cooperation project to transport Russia’s raw materials, such as coal, from Khasan to Rajin Port in North Korea, and then to at least three other ports in South Korea.

The trilateral project is a key part of President Park Geun-hye’s “Eurasia Initiative,” which aims to boost the regional economy through free trade and economic cooperation across Eurasia by connecting the railways that link the two Koreas, China and Russia, leading to Europe.

Park initially proposed the idea on Oct. 18, 2013, during an international conference on Eurasian cooperation.

In terms of Seoul’s additional sanctions against Pyongyang, Yun said on Sunday’s talk show that the government will examine any new punitive measures and make a public announcement “very soon.”

A high-level official who spoke under condition of anonymity said the announcement might be made in the coming days.

A consortium of three South Korean companies - top steelmaker Posco, the Korea Railroad Corporation (Korail) and ship maker Hyundai Merchant Marine Co. - are involved in the project, which will see coal transported to Rajin, North Korea, from the Russian border city of Khasan on a reconstructed 54-kilometer (33-mile) railway before being shipped to South Korea.

South Korean companies were expecting to use the Russian coal for thermal power generators and iron making, reducing importing costs from current routes.

The project has gained increasing political and economic significance over past years and has managed to be untouched by Seoul’s numerous sanctions against Pyongyang in the face of military provocations.

One of the most notable exemptions came on May 24, 2010, when the South Korean government declared a wide range of sanctions cutting off most exchanges with the north, although leaving open the Rajin-Khasan Project and the Kaesong Industrial Complex. The Kaesong industrial complex was shut down Feb. 10.