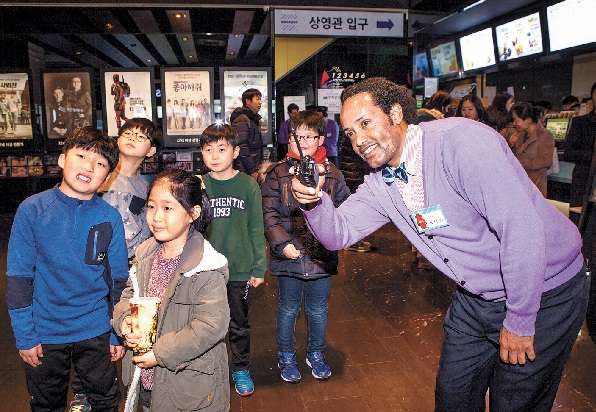 Yonas Teklea, 41, an Ethiopian who received legal refugee status in March 2015, guides customers at the Megabox theater in Dongjak District, southern Seoul, where he works. Teklea is the first of three refugees hired by Megabox. [PARK SANG-MOON]

It started simply as a way to give back to society, but it resulted in throngs of foreigners all lining up to see the latest feature films. It was an unusual scene, no doubt, one that appeared newsworthy - and looked good on camera.

Oh, and brand promotion was a definite plus.

When the time came to conceptualize a project that would comply with the company’s vision to embrace cultural diversity, one man thought he had the answer.

Jung Yong-taek, managing director of the company’s Isu branch near Isu Station on subway line No. 7 in Dongjak District, southern Seoul, took on a challenge that not many other - if any - domestic conglomerates have tried.

He hired the company’s first refugee, an Ethiopian man categorized by the African government as a “terrorist.”

In a highly homogeneous country where the thought of a “foreigner” still equates to “American,” the risks were high, but the dice was rolled.

“We’re talking about the service sector,” Jung said. “I was worried that our customers might feel uncomfortable having to communicate with someone with a different skin color.”

But with Yonas Teklea, 41, who flew to Korea in March 2008 to seek refuge in a country he barely knew, the doubt didn’t last long.

“He’s always so committed to his work with such a bright attitude,” Jung said. “I’ve never heard any complaints from customers or his co-workers.”

Teklea is now into his sixth month at the Megabox theater, where he mingles with mostly Korean college students working part-time jobs there. From 8 a.m. to 5 p.m., he is primarily responsible for taking tickets, sound checks and cleaning.

Lee Nam-hee, an assistant inspector at Dongjak Police Precinct’s foreign affairs division, recommended Teklea upon hearing about Megabox’s plans. The precinct has jurisdiction over the country’s largest nongovernmental organization that supports refugees, the Refuge pNan, through which Lee got to know Teklea.

In Korean, pNan translates as “a refuge.”

“He always has such positive energy, someone who just makes others feel better,” Lee said.

Working at Megabox would also provide Teklea a more stable work environment, something few refugees are privileged to have, he added.

“Even with legal refugee status,” Lee said, “most asylum seekers here face prejudice, or the presumption that they lack Korean-language skills, and end up working in the suburbs at factories with dire working conditions.”

At a coffee shop near the Megabox, over a cold Coca-Cola, Teklea explained how he left Ethiopia to come to a land unknown. He only just received legal refugee status in March 2015, seven years after arriving in Korea. Before Megabox, he worked at a paper factory in Ansan, Gyeonggi, where his former employer, he said, physically and verbally abused him daily.

A former Bible teacher at public schools and evangelical churches in Ethiopia, Teklea got involved with a major antigovernment group and rallied outside state offices before ending up on the country’s terrorist list. Worried about their son’s safety, his parents convinced him to emigrate.

Tekla eventually chose Korea, where a former leader involved in the antigovernment group was evangelizing.

During his free time, Teklea spreads his antigovernment message to a group of Ethiopian expats, whom he meets every month in Itaewon-dong, central Seoul.

“When I tell people that I work at Megabox, they’re always gasping out of shock,” Teklea said, laughing. “They ask me how I got the job, what I do here, how long I work and go on and on and on. I don’t know exactly why they’re so flabbergasted, but I guess it’s because the theater is so well-known.”

The fact that he doesn’t have to communicate much with customers makes it easier for him, considering his Korean-language skills are elementary. His colleagues at the theater take turns teaching him Korean.

In fact, Teklea has adjusted to the work so well that Megabox has decided to hire more refugees. The company placed an Egyptian in the Dongdaemun branch in Jung District, central Seoul, and another Ethiopian in the same theater as Teklea.

The company hopes to reach out to the thousands of asylum seekers here, many of whom have yet to receive legal refugee status.

Still, Teklea dreams to return one day to Ethiopia, some 5,698 miles away, “when the time is right.”

“I’m a freedom fighter,” he said. “If the government opens to change, why not go back?”