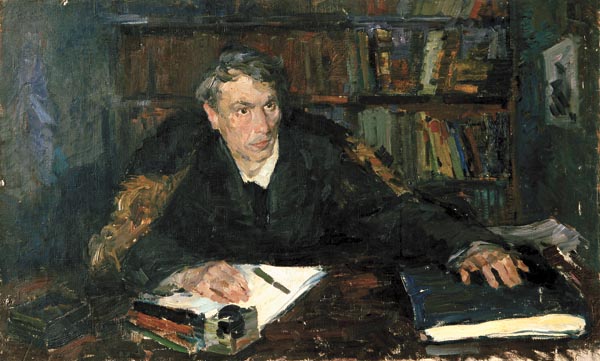 Korean-Russian artist Varlen Pen’s “Portrait of the Writer B. L. Pasternak” (1947),is part of “Pen Varlen 1916-1990” exhibition running through May 8 at the National Museum of Modern and Contemporary Art’s Deoksu Palace branch in central Seoul. [MMCA]

Varlen Pen (1916-1990), or Byeon Wol-lyong, was a rare successful painter with Korean ethnicity in Russia. However, few South Koreans have heard of the artist, who created not only the paintings of Socialist realism that propagate the Communist values under the Soviet Union regime but also many portrait paintings. The main reason could be the Cold War, which ended in 1992 with the Soviet Union’s dissolution but is virtually persisting on the Korean Peninsula.

In efforts to help Koreans find a missing part in their understanding of the 20th-century art history, the National Museum of Modern and Contemporary Art (MMCA) started the first-ever large-scale retrospective of Pen at its Deoksu Palace branch in central Seoul on Thursday.

About 200 pieces of Pen’s paintings, etchings, lithographs and drawings are on view in the exhibition, which celebrates the artist’s 100th birthday. There are also 70 pieces of reference items, including Pen’s report to the Soviet Union’s Culture Ministry on his trip to North Korea. He was dispatched by the ministry to Pyongyang in 1953 to help the North re-establish its university of fine art and teach styles and techniques of Russian academism and Socialist realism. He stayed there for 15 months. 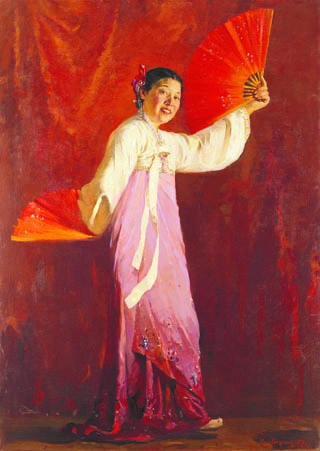 “Portrait of the Dancer Choi Seunghee,” is part of “Pen Varlen 1916-1990” exhibition running through May 8 at the National Museum of Modern and Contemporary Art’s Deoksu Palace branch in central Seoul. [MMCA]

MMCA Director Bartomeu Mari said in a press preview on Wednesday the exhibition would help broaden horizons of understanding about “not only the history of Korean modern art but also that of modern Korea and that of Eurasia.” In addition, the show would help deliberate on “what is the role and status of realist paintings in the modern art history.”

The exhibition is divided into four parts. Part 1 “Panorama of Leningrad” features posters and paintings of Socialist realism. They include the painting of a fisherwoman portrayed as a “socialist heroine” due to her labor and fecundity and the etching of a village’s people joyful at the Communist revolutionary Vladimir Lenin’s visit. Pen created the works as a professor of the Ilya Repin Leningrad Institute of Painting, Sculpture and Architecture, which is a leading Russian art educational institution, now called the Russian Academy of Arts.

Part 2 “Portraits of Souls” features Pen’s portrait paintings of various people that encompass his colleagues in the academy, writers, actors and his own family members. The exhibits include the portrait of the writer Boris Pasternak, best known for the novel “Doctor Zhivago” and that of his mother in hanbok or Korean traditional clothes, which he painted in his later years, missing his roots.

“The artist’s mother and sister were forced to move from Primorsky Krai in the East, where he was born, to Uzbekistan, by the Stalin regime’s policy, while he was exempted from the mass deportation of ethnic Koreans as he was an art institute student,” explained Park Hye-sung, curator of the exhibition. 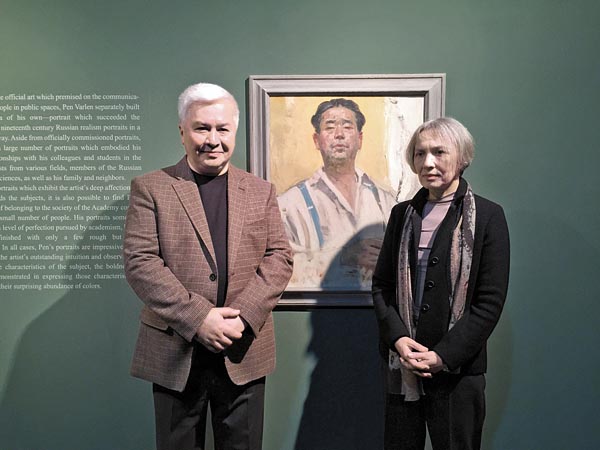 Even amid such persecution on the ethnic minority, the artist made his way to the elite of artists. “But his promotion in the academy was slow, compared to his colleagues, perhaps because of his ethnicity,” said art critic Moon Young-dae, one of few South Koreans who discovered Pen early and promoted him here for more than two decades.

Part 3 “Journey to Pyongyang” features the paintings and drawings Pen created during or after his stay in Pyongyang. He could never visit North Korea again after the stay, because Pyongyang prohibited it due to complicated political reasons including his reject to be naturalized as a North Korean citizen and the cooled relations between the North and the Soviet Union after the death of Stalin.

“Not only his works but also his life itself show the turbulent history of the Korean Peninsula, Russia and the whole Eurasia,” Park said.

“He missed the Korean Peninsula so much that he painted the landscapes of Russia with pine trees that resembled those of Korea in his latter years,” she continued. “He also painted the Mount Kumgang based on his memory.”

His son and daughter, Sergey and Olga, who are both artists like their father, said in the press preview their father didn’t talk about South Korea as he never visited the country but he had always interest in it.

“When some South Koreans visited the Soviet Union for some event in the early 1980s, my father went there to talk with them,” Sergey said.