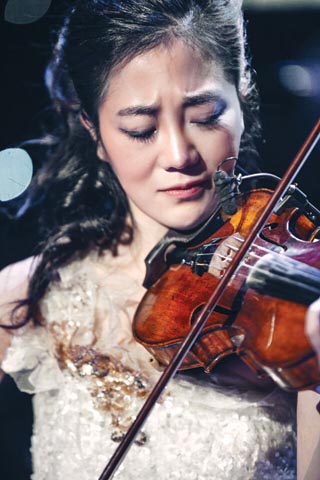 The NatCon Conference, an annual event organized by the U.S. National Council for Behavioral Health related to mental health and addiction that each year invites prominent figures as speakers, this year invited Korean violinist Park Ji-hae to present.

Previous guests at the conference include former U.S. Secretary of State Colin Powell and Hollywood actress Ashley Judd, who talked a bout mental health. This year’s conference is being held in Las Vegas from yesterday until tomorrow.

Park was invited to speak at the conference based on her personal experiences.

Not only does she play in music halls, the violinist plays for people in hospitals, churches and prisons in order to help make positive changes in their lives with music, just as she did in the past.

Park previously suffered from severe depression when she was a young violinist who was expected to have a promising future career. Park was able to treat her depression with music.

She has talked about her experiences in a TED Talk in 2013, in which she played the violin in addition to giving her speech.

“The violin, which meant everything for me, became a great burden on me,” she said in the TED Talk. “It was the music that helped me restore my soul.”

She will be performing May 12 at the Sejong Center for the Performing Arts in Seoul as part of the “Park Ji-hae Korea Super Tour” as well as holding concerts in the U.S. immediately after the concert, according to the press release.