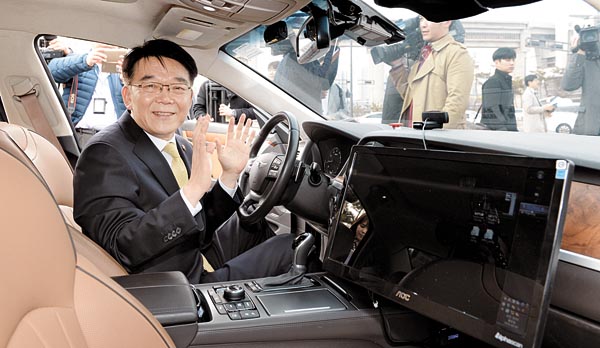 Minister of Land, Infrastructure and Transport Kang Ho-in lifts both hands off the steering wheel of a Hyundai Motor autonomous vehicle that was tested in Sejong City on Monday. When it was tested, the minister sat in the backseat. [NEWSIS]

The Hyundai Motor Genesis took only five minutes to drive 150 meters (500 feet) on a road near the Sejong City office of the Ministry of Land, Infrastructure and Transport.

Hyundai Motor’s demonstration of its autonomous driving technology went without a hitch on Monday. The choice of passenger was intended to signal that the Korean government was fully supporting development of the technology to give Korean carmakers a jump in the fierce global competition for driverless cars, on which every carmaker - and even major IT developers like Google - are pinning big hopes.

On Monday, the Transport Ministry issued the country’s first permit for advanced autonomous driving, allowing cars with such systems to be driven on public roads. Hyundai Motor applied for the permit in February.

It was issued for the Genesis sedan used in the test, although it is temporary and can only be used for research purposes.

An advanced system refers to a situation in which a driver can partially use the self-driving mode to get to a destination.

Fully automated driving means the car will drive itself from the point of being turned on to parking at a destination. Hyundai said it will invest about 2 trillion won ($1.7 billion) through 2018 in the technology.

The ministry showcased Hyundai’s advanced self-driving technology through a test drive on a two-way, four lane road in Sejong City. Minister Kang sat in the rear and a driver provided by Hyundai Motor sat in the driver’s seat. Because the technology worked, he didn’t have to touch the steering wheel or any of the pedals.

The car operated in accordance with the traffic situation. There were no accidents or collisions as when Google conducted a similar test in Silicon Valley on Feb. 14.

“It was only about a five-minute test drive, but I was able to see that Hyundai’s autonomous driving system is improving compared to the times I experienced it at the automaker’s Namyang research center in the past,” Kang said. “The ministry will help the automaker improve the overall system so that a fully automated driving system can be commercialized as soon as possible.”

Thanks to the permit, the Genesis sedan can run in advanced self-driving mode in six areas, including a 41-kilometer section between the Seoul tollgate of the Gyeongbu Expressway and Hobeob junction of the Yeongdong Expressway, and on 320 kilometers of roads on five national highways stretching through nine cities: Suwon, Hwaseong, Pyeongtaek, Yongin, Anseong, Goyang, Paju, Gwangju and Seongnam. Currently, autonomous driving is forbidden for normal drivers, and only partial self-driving like Hyundai’s Highway Driving Assist system is allowed. Drivers are required to keep their hands on the steering wheel. Hyundai’s Genesis is the only vehicle authorized to ride under advanced self-driving mode in the country.

There were conditions the Genesis had to satisfy to get the permit. According to the Korea Transportation Safety Authority, the vehicle needed to be able to shift from autonomous driving mode to manual at any time, the system needed to be able to detect defects in real time, it had to have a front collision prevention system, and it needed a device that visually records the entire trip.

The ministry said at least two people including the driver must be in the car while it is in motion, and the person not in the driver’s seat must check traffic conditions to see if the driving system is operating properly. The car must also have a sign showing that it is in autonomous driving mode.

“This means that the country is setting up basic institutional strategies for autonomous driving,” said Kim Yong-suk, a spokesman for the ministry’s automobile management division. “We will carefully monitor Genesis test drives over the next five years and will try to expand the autonomous driving zone while providing more upgraded navigation maps so that the country can foster related industries.”