Business group appeals for bills to be approved

Business group appeals for bills to be approved 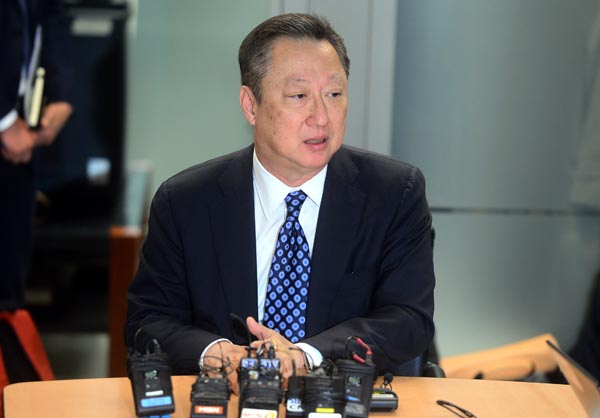 “We hope the 19th National Assembly will wrap up in applause,” he told reporters at the headquarters of the Korea Chamber of Commerce & Industry (KCCI) in central Seoul. “The Assembly is in such a sorry state to make me think lawmakers are far from interested in economic bills. Please take into account the fact that more than 1.6 million citizens have offered their petition signatures for the passage.”

His public plea for the bills’ approval through the media follows the same appeals by many other leaders of business lobbying groups and the Park Geun-hye administration. They claim passing the bills will create more businesses in the service sector and eventually generate more jobs.

The press conference marked the 61-year-old chairman’s first public appearance since his unexpected retirement last week as chairman of Doosan, the nation’s 11th-largest conglomerate. However, he remained tight-lipped when asked about his departure.

“I am standing here out of pity for the economy-related bills,” he said. “It would not be appropriate to talk about the business I belong to.”

With no prior notice, he announced on March 2 that he would step down as chairman, and his nephew Park Jeong-won, the first grandson of Doosan founder Park Too-pyong, would succeed him. The heir was already serving as chairman of Doosan Corporation, the holding company of Doosan Group. The 54-year-old Park Jeong-won has become the first chairman of any chaebol in Korea who is fourth-generation to the founder.

Park Yong-maan assumed the KCCI chairmanship in August 2013 to take over from then-CJ Chairman Sohn Kyung-shik. Park’s three-year term was renewed in March last year through an election.

Leading conglomerates such as Samsung, Hyundai and SK are still run by second-generation leaders, and the first two are bracing for a generational change.

Park Yong-maan vowed to concentrate on “normalizing” Doosan Infracore, a construction machinery and equipment arm, as he retains his post as its chairman. He is set to register himself at the shareholders meeting scheduled on March 25 as “registered managing director” to assume legal responsibility for the ailing Doosan subsidiary.

Shares of Doosan Infracore shot up 22 percent on Monday to close at 6,210 won ($5.15) on the main Kospi as investors bet on the scenario that Park would contribute to resuscitating the company’s financial health.