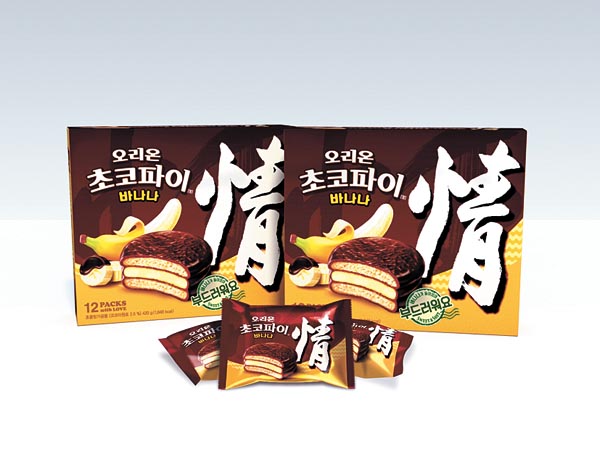 The newly introduced banana-flavored Choco Pie that was developed to celebrate the 60th anniversary of Orion. [ORION]

Choco Pie is about to undergo a makeover.

It has been 42 years since Orion launched the first marshmallow-filled mushy chocolate.

Orion on Monday said it was adding banana-flavored Choco Pie to celebrate the company’s 60th anniversary.

According to the confectioner, the first development on the banana-flavored Choco Pie was launched in 2013, and the company wanted to celebrate its 60th anniversary with something new. The development was led by Kang Soo-cheol, who is head of the pie development team and has worked on improving Choco Pie for the last 20 years.

The team, made up of 10 researchers, tried about 20 different flavors, but when it came to the final decision, banana took the No. 1 spot.

Orion said it has put banana in the marshmallow, which makes it much softer and maximizes the sweet flavor. The newly released banana-flavored Choco Pie also has an increased amount of eggs and milk in the biscuit.

Because of the changes, the diameter of the confectionery remains the same, but the height has increased from 2.5 centimeters (1 inch) to 2.6 centimeters, and the weight has fallen from 39 grams (1.4 ounces) to 37 grams.

Orion said it plans to market the original Choco Pie and new flavored version as separate Korean confectioneries in the global market.

“Like when you go to Japan, you eat ‘Tokyo Banana’ [a sweet banana confectionery] and when you go to Taipei, you purchase pineapple cake,” Orion official Yoon Hyun-ho said. “We will focus our marketing so that foreigners visiting Korea will look for banana-flavored Choco Pie.”