Sales of imported cars fell for the second consecutive month following a series of scandals related to product quality and after-sales service.

The figures for Volkswagen and Audi were even worse. Volkswagen’s sales in January and February dropped by 34.8 percent year on year. Audi’s sales during the same period decreased by 51.9 percent, the biggest fall among foreign automakers. 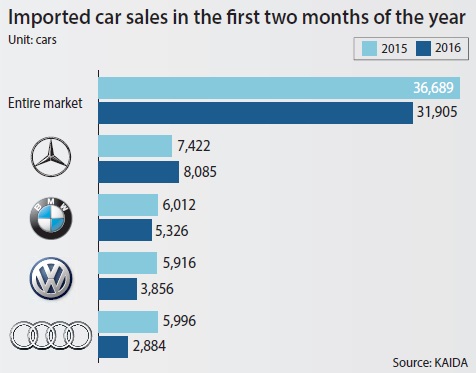 “Overall sales dropped in February as the month had fewer business days with the Lunar New Year holiday season,” said Yoon Dae-sung, an executive at Kaida. “Some brands suffered from a supply shortage as well.”

But industry insiders say sales have been affected by a series of scandals. BMW was the most popular brand last year, but after 11 BMWs cars caught fire for unknown reasons while on the road over the past four months, its sales have been declining. Three of the accidents occurred last month. The company said in February it inspected the cars but found no defects.

“Such fires happen quite a lot, more than people imagine,” a BMW Korea spokesman said. “About 5,000 cases occur each year, and foreign cars only account for about 4 percent.”

BMW Korea is currently doing damage control. The company said it will compensate the owners of the cars in question if their vehicles had been regularly inspected at an official service center. The company also decided to instruct private auto shops in repairing their cars starting in April, the first time a foreign automaker has done so. After the emissions scandal broke out last year, sales of Volkswagen and Audi started to decrease significantly. Volkswagen’s sales in October dropped to 947 from September’s 2,901. But that figure increased to 4,517 in November, the highest that year, as the automaker offered a series of eye-popping discount promotions, including interest-free installment programs and a discount of up to 17.72 million won ($14,700) for customers who paid with cash for 17 models, including its best-selling Tiguan SUV. But it looks like the promotions have lost their efficacy, as the accumulated sales of Volkswagen in the first two months of this year dropped by 34.8 percent from a year ago to 3,856. Audi wasn’t even able to sell 1,000 cars last month. The latest issue was the individual consumption tax, which the government decided to lower from 5 to 3.5 percent to boost the domestic economy. Starting in February, the government said automakers should refund the tax to customers who purchased cars in January to evenly distribute the benefit, but five automakers - Mercedes-Benz, BMW, Volkswagen, Volvo and Infiniti - refused, claiming the promotion they offered in January could be seen as their voluntary extension of the tax reduction. But after being threatened by some angry consumers who said they might file a lawsuit against the automakers, Mercedes-Benz Korea announced on Friday that it would offer refunds after all.

“Foreign automakers need to know that local consumers can take action every time they are unfairly treated,” said Ha Jong-sun, an attorney at Barun, a firm currently managing a class-action lawsuit against Volkswagen over its tampering with emissions testing.