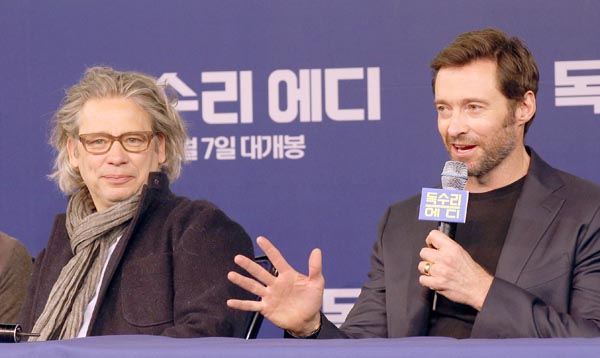 Actor Hugh Jackman, right, and director Dexter Fletcher talk about their upcoming film “Eddie the Eagle” at a press event in Seoul on Monday. The biopic follows the life of British ski jumper Michael “Eddie” Edwards, who became a national hero for participating in the 1988 Winter Olympics in Calgary, Alberta, after overcoming financial and physical challenges. [NEWSIS]

Hugh Jackman, the Australian-born Hollywood actor known for his admiration for Korea, visited Seoul on Monday to promote his latest film, “Eddie the Eagle.”

“It is a joy and pleasure for me to come to Korea, particularly to Seoul, as a goodwill ambassador for Seoul,” Jackman said during a press event that morning at a Four Seasons Hotel in central Seoul. “It is a film with a lot of humor with a great story. I think by the end of the movie, it will bring tears to your eyes.”

“Eddie the Eagle” is a biographical film about British ski jumper Michael Edwards - also known as Eddie Edwards - who became a worldwide hero after participating in the 1988 Winter Olympics in Calgary, Alberta, despite his financial and physical shortcomings. 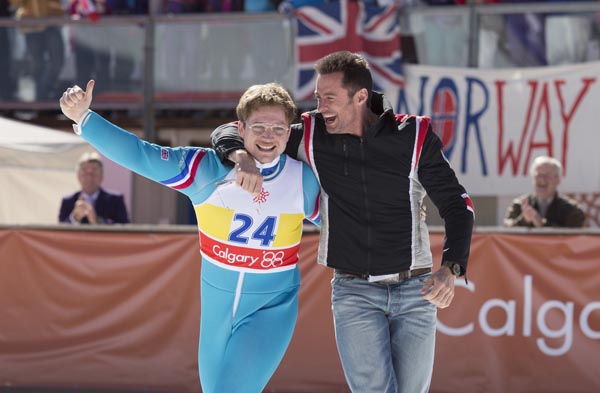 “It was great to be in a movie where I get to watch someone else do all the training,” Jackman said, explaining how it feels to play a character other than the stunt-heavy Wolverine he is best known for in the “X-Men” series.

“It was terrific not having to wake up at 3 o’clock in the morning and go to gym,” he said. “So in every way, it was a nice change of pace.”

Jackman also noted that the film gave him the chance to discover the charms of ski jumping.

“Coming from Australia, I knew nothing about ski jumping,” the 47-year-old actor said. “But I was still mesmerized by the sport.

“I think that on one hand [ski jumping is] so very beautiful and so graceful, and on the other hand very death-defying and dangerous. It’s captivating to watch,” he added, encouraging everyone to go see the sport live at the upcoming 2018 Winter Olympics in Pyeongchang, Gangwon.

Jackman and director Dexter Fletcher, who also attended the event, said they were both aware of the 2009 Korean film “Take Off,” which was previously the only mainstream film about ski jumping.

“It set the bar very high in terms of how the ski jumping should look,” Fletcher said.

In addition to giving off the thrill and excitement that a sports movie should, both filmmakers also believe in the film’s touching story.

Admitting that 90 percent of his previous career as an actor involved getting “rejected,” Fletcher said that “working hard for resentment” is “the nature of pursuing a dream,” which is embodied by Eddie in the film.

“Eddie is the man who knows how to believe in yourself,” he said, adding that he shows the importance of “trying and trying” rather than focusing only on winning.

Jackman said he hopes audiences will “not only respond to the sport of ski jumping but also to [the film’s] heart as well.”

Egerton, who was scheduled to arrive in Korea later in the day, will join his two colleagues at further promotional events today.