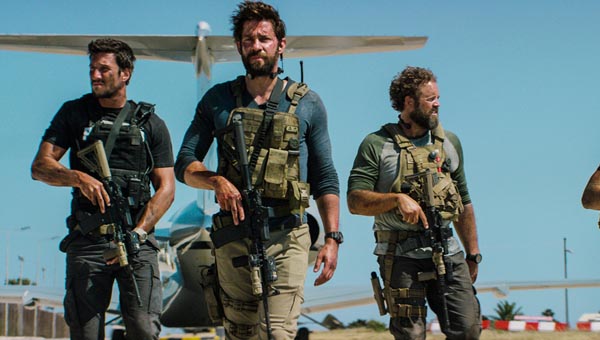 Michael Bay’s new film, “13 Hours: The Secret Soldiers of Benghazi,” which centers on the deadly terror attack in 2012, debuted in sixth place at the Korean weekend box office. [LOTTE ENTERTAINMENT]

After everything the film had been through, most notably being released 14 years after the screenplay was first written due to investment struggles, it has now sold 2.6 million tickets, making 19.9 billion won ($16.6 million) at Korean theaters.

Due to its positive reception in Korea as well as its focus on the internationally sensitive issue of the so-called comfort women, “Spirits’ Homecoming” is being considered for release abroad.

It will be released in the United States, but the exact date and number of screens have not been revealed yet.

In second place was the adventure fantasy “Gods of Egypt,” starring Gerard Butler, with 442,387 admissions.

Directed by Alex Proyas of notable sci-fi films such as “Knowing” and “I, Robot,” the CGI-heavy film made 3.8 billion won during its opening weekend.

Disney’s “Zootopia” showed steady performance in Korean theaters, remaining in third place for the third week in a row. Since it opened nationwide on Feb. 17, the film has sold nearly two million tickets, so far making 14.4 billion won.

Roughly based on the true story of the terror attack against the U.S. compound located in Benghazi, Libya, in 2012, which killed the American ambassador to Libya as well as three other staff members, the film follows members of the security team who were at the site at the time.

The film has John Krasinski and Pablo Schreiber in the lead roles.