Sometimes it’s the Koreans on the darker side

Sometimes it’s the Koreans on the darker side 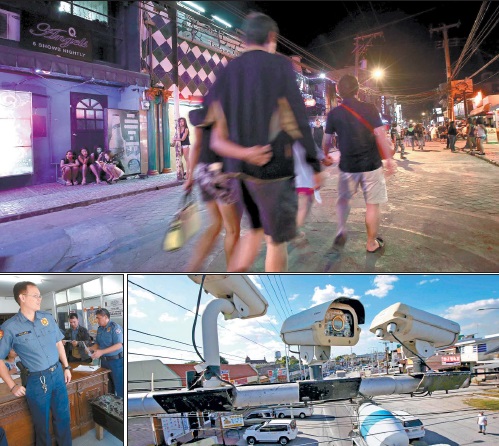 Clockwise from top: Tourists stroll with sex workers on Walking Street, the adult entertainment district in Angeles City on Feb. 1, while more prostitutes look on. CCTV cameras installed in Korea Town in Angeles City, Philippines, to cut down on crime. Police officers at Station 4, which oversees Walking Street. [OH JONG-TAEK]

One afternoon in February in Angeles City, a young woman in a short skirt was soliciting Korean men in the adult entertainment district, Walking Street.

Walking Street is chockablock with bars offering prostitutes and is one of the busiest areas of the city, even on weekdays. Scantily clad girls grab potential customers to draw them into bars.

“Come inside and look around,” said Tiffany, a 21-year-old hostess. “Many Koreans come here so there are girls who know how to speak Korean. Should I call someone over?”

The bars’ customers are Korean, Chinese and Japanese men ranging in age from their 20s to their 50s. There are also a number of American men over the age of 60. 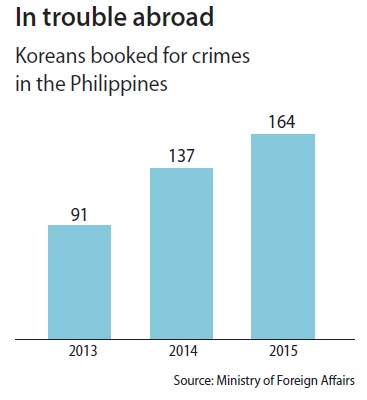 Korean tourists know Angeles as the City of 3Gs: Golf, Gambling and Girls. Any hotel in the city is 10 minutes away from a golf course and casino - and probably nearer to female sex workers.

Many tourists play golf during the day and after sunset enjoy gambling or the offerings of the sex industry.

“If 300 people board a plane from Korea to the Philippines, 250 will be tourists,” one Korean resident in the Philippines points out, “and most of them will be men who are visiting to enjoy the adult entertainment industry.”

Over 1.2 million Korean tourists visit the Philippines each year.

Enjoying good times in the Philippines comes with risks. Since 2013, 34 Koreans have been killed in the country, although the majority were not tourists but “Local Koreano,” the Tagalog term for Koreans who live in the Philippines for business or retirement.

The JoongAng Ilbo conducted an investigation between Feb. 1 and 5 into Koreans killed in the country over the past three years in regions including Manila and Angeles City with the cooperation of the Korean Ministry of Foreign Affairs.

While full-time residents are clearly at risk, tourists can get into trouble too.

“Criminal Korean” is local lingo for Koreans who bother Filipinos or commit crimes there.

According to the Foreign Ministry, since 2013, 392 Koreans were booked by police in the Philippines for various crimes.

From 1 p.m. to 2 p.m. on Feb. 2, reporters could spot at least five drunk Korean men on Walking Street.

A Korean man in his 20s was spotted with a Philippine woman in his arms in a hotel elevator. He advised his friend, “You should hurry up and get one too. Isn’t this one good?”

“It is so common to hear on the news of a Korean tourist being involved in prostitution or drugs,” said Bianca Bonjon, a 24-year-old Philippine college student, “it’s not even surprising anymore.”

Gambling is another popular pastime for tourists.

“The scale is small compared to Macao,” said one operator of a VIP gambling room, “but many Koreans come here to enjoy gambling. You can sometimes spot celebrities or athletes.”

Of the 392 Koreans booked by the police in the Philippines in the past three years, 84 were charged with immigration issues. But the next highest number was booked for assault, bodily harm or fraud, at 46 each. Some 24 Koreans were suspected of involvement with drugs and 21 were accused of rape or sexual assault.

There are also Koreans known to commit serious crimes at home who flee to the Philippines. In 2007, Choi Se-yong, 48, murdered a female employee at a currency exchange counter in Anyang, Gyeonggi, before escaping to the Philippines.

In hiding, Choi wrote on Internet portal sites that he was looking for travel companions, lured Korean tourists to the country and then held them for ransom. He stripped his victims, chained them up and threatened them with a pistol or knife.

Choi allegedly abducted some 11 Korean tourists, extorting some 500 million won from his victims. He was arrested in 2013 and repatriated to Korea. He has been on trial here since last year.

A 40-year-old Korean man surnamed Yim, placed on the wanted list for operating an illegal gambling website in China, tried escaping to the Philippines on Jan. 2. Yim had operated the website since May 2013 and raked in some 30 billion won. The Philippines was an ideal hideout to continue to keep the website going.

But because he was on Interpol’s wanted list, Yim was initially denied entry by immigration at the Manila Ninoy Aquino International Airport.

Yim tried to use bribes to be allowed to return to China, but the immigration bureau held him for over 30 hours, waiting for Korean police to arrive.

Seo Seung-hwan, a 39-year-old superintendent with the Korean Desk in Manila, who works with local police on cases involving Koreans, said, “He continued to try to escape before he was repatriated, but the Immigration Bureau cooperated actively, so he was brought back to Korea two days later on Jan. 4.”

This was the first time a Korean criminal was caught at the airport and eventually repatriated to Korea.

Park Yong-jeung, an official with the Korean Embassy in the Philippines that oversees police cases, said, “Korean police are continuously sharing information on prostitution brokers and websites with the embassy and with local police and have consistently through diplomatic channels requested cooperation to crack down on these criminals.”

“There is a misunderstanding that Koreans are the only victims because of the unstable public order situation in the Philippines,” one overseas resident who is a part of an association of Koreans in the Philippines said. “However, there is also a serious problem with Korean criminals.”