New sanctions will be ‘symbolic’

New sanctions will be ‘symbolic’ 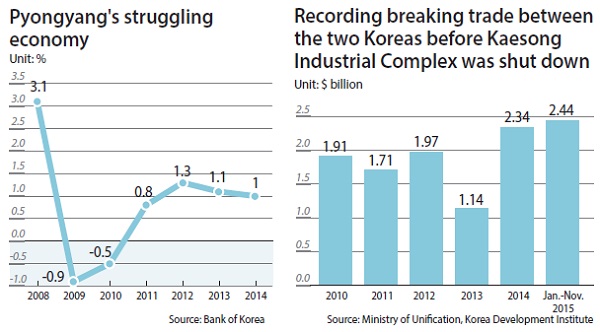 South Korea’s new unilateral sanctions against North Korea, which include bans on any financial transactions and business exchanges even if they are indirect, will likely have limited impact on Pyongyang’s economy.

Analysts say the sanctions are largely politically strategic and symbolic.

However, some economic pressure will be felt, especially in combination with the international sanctions.

“Economically, the South Korean sanctions will not have a threatening impact, but the fact that the South Korean government is taking assertive actions will have more political and strategic influence than previous sanctions sought by both the United States and United Nations,” said Kim Han-kwon, a professor at the Korea National Diplomatic Academy.

For any sanctions to have an impact, the role of North Korea’s biggest trading partner, China, is crucial.

“In the past UN sanctions after the first three nuclear tests, China only participated half-heartedly and resumed its economic transactions with North Korea two quarters later,” said Prof. Lee Jong-kyu of the Korea Development Institute, a state-run think tank. “If China’s participation lasts longer this time, North Korea will definitely feel the pinch.

“Although it is hard to predict whether North Korea’s economy will have positive or negative growth this year,” he continued, “it is clear that its trade will suffer heavily once the international sanctions are in place.”

North Korea is heavily dependent on the Chinese market, which takes up an estimated 90 percent of its trade.

The North Korean economy has been sliding for the last couple of years since it reached a peak in 2012. According to the Bank of Korea, Pyongyang’s economic growth decelerated to 1 percent last year from 1.1 percent the previous year.

Before the Kaesong Industrial Complex was shut down, trade between the two Koreas was breaking records. In the first 11 months of last year, trade amounted to $2.44 billion, 14.5 percent higher compared to the same period in the previous year. Exports from North Korea grew nearly 20 percent year on year in the first 11 months to $1.31 billion. Imports, on the other hand, saw a slight dip of 9.1 percent to $1.13 billion.

“The biggest difference is that the sanctions are coming not from a handful of countries but from multiple countries similar to the sanctions Iran was under until recently,” said Professor Kim of the Korea National Diplomatic Academy.