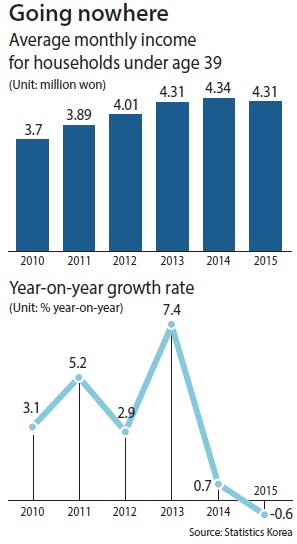 According to Statistics Korea, the average monthly income of households whose breadwinner is 39 years old or younger and who have more than two members in the family amounted to 4.31 million won ($3,570) last year. That’s a 0.6 percent dip compared to 4.34 million won a year ago.

This is the first time that the income of young people has retreated since 2003, when the national statistics agency first compiled the data. Income for the younger generation showed a year-on-year growth rate as high as 7.4 percent in 2013, but it started to decelerate since 2014 as people in their 20s and 30s struggled to find or hold on to jobs.

This was a contrast to overall Korean household monthly earnings, which grew 1.6 percent compared to the previous year to 4.37 million won. Overall average income rose largely because older people have a better chance at landing jobs thanks to a government-led initiative to encourage companies to hire seniors who have retired.

Why are young people missing out? A report by the National Assembly Budget Office released last week showed people in their 20s and 30s have been struggling to find decent jobs as the economy struggles. Major companies, including Samsung Electronics, have been undergoing restructuring to deal with the weak economy.

“As economic recovery has slowed due to issues like the Middle East respiratory syndrome last year, companies of all sizes started preferring hiring senior workers to entry-level and junior workers,” the report said.

Lee Jun-hyup, a senior researcher at Hyundai Research Institute, explained that the income shrinkage in younger households signals that many young breadwinners are working at low-quality jobs, often at small or medium-size companies, and that the income gap between small and large companies is still large.

Lee said a key to boosting household income for younger people is narrowing the salary gap between large conglomerates and smaller companies.

“The government should accelerate restructuring the labor market in Korea, so small and midsize enterprises [SMEs] can grow into conglomerates to better pay their employees,” Lee said.

Lee also said the government should work on strengthening job mobility to allow more workers at SMEs to get jobs at conglomerates.

“It is almost impossible for young people who started careers at SMEs to get into large companies,” he said. “That is why college graduates choose to remain unemployed instead of building up their portfolio at smaller companies. This directly translates into high youth employment.”