After a 40-year career, no acting, just feeling

After a 40-year career, no acting, just feeling 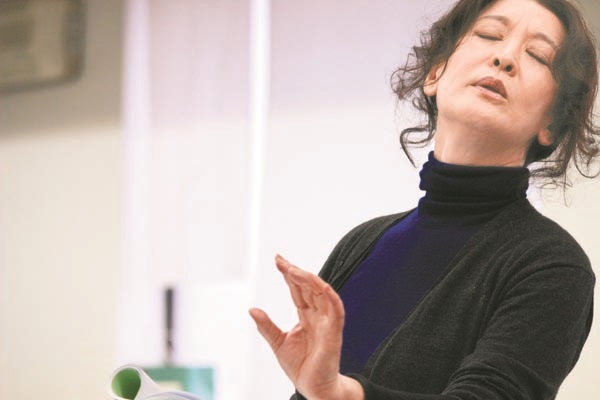 On Saturday afternoon, veteran stage actress Yoon Suk-hwa was waltzing up and down a small practice hall in Daehangno, central Seoul, in 12-centimeter (4.7-inch) heels, rehearsing for her upcoming play, “Master Class.”

As soon as the rehearsal came to an end, the 60-year-old actress stepped out of the killer heels that looked perhaps too high for her age and asked for a bandage, complaining that the shoes hurt her feet.

Although it was just an informal walk-through of the play with other cast members, Yoon says she wears the heels whenever she goes on stage, whether it is for rehearsal or for real, as her character, Maria Callas (1923-77), one of the most renowned and influential opera singers of the 20th century.

“Master Class,” organized to celebrate the 40th anniversary of Yoon’s debut, centers on this legendary diva holding a voice master class at the Julliard School after experiencing vocal decline. Written by Terrence McNally, the play opened on Broadway in 1995. Yoon’s “Master Class” kicks off at the LG Arts Center in southern Seoul tomorrow, and runs until March 20.

“It is definitely not easy for me to be in those heels for hours, walking up and down the halls even for rehearsals,” said Yoon. “But it makes a big difference. When I’m in these heels, I can be totally absorbed in the character of Maria Callas and lose myself. Plus, I have to get used to the heels as well because they aren’t familiar shoes for a 60-year-old woman like me.”

Yoon, who is known for her ardent attitude toward everything she does, said, “There’s no other play besides ‘Master Class’ that is better suited for my 40th-anniversary piece.”

“‘Master Class’ is a play that ruminates on Maria Callas’ life and her strong artistic belief,” she continued. “That belief is what I’ve been holding on to for the last 40 years of my career. That belief is the reason why I’ve been doing theater for the past 40 years and answers the question of why I have to continue doing what I do.”

Yoon played the character in 1998 when the play was first staged in Korea. She usually doesn’t do encore performances, but for her 40th anniversary, she decided to replay the character again 18 years later. 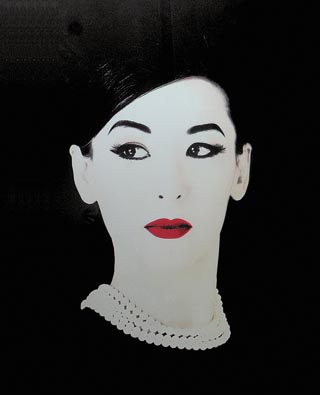 “Master Class” kicks off at the LG Arts Center tomorrow and runs until March 20.

“In fact, I’m afraid of and I dislike doing encore performances after many years,” she said. “The stage may be better technically with the latest developments, but I’m afraid of whether I can love this work and love the character as I loved them the first time.”

But she says she feels different about Callas.

“Back then, I was captivated by the text of this play,” said Yoon. “But now looking back, with age and many ups and downs in my career, I feel like I can really be her on stage.”

As Callas teaches the students in “Master Class,” she retreats into her own recollections of her life, such as her glory days at La Scala, her fierce hatred of her rivals and the press that savaged her early performances, as well as her affair with Aristotle Onassis. The number of lines Yoon has to memorize seems immense, but Yoon even memorized the Italian songs the opera singers - the students of Callas - sing in the play.

“It was really difficult for me to memorize all the lines and I am still trying to memorize them,” said Yoon. “The amount of lines I have to memorize is about twice as long as a long monodrama, not to mention the difficult names and Italian popping up here and there.”

“Maria Callas, I imagine, was very passionate in this classroom,” said Yoon. “She doesn’t sing along with her students, but she lip-syncs here and there and sometimes sings out loud in some parts. In order to really portray this passionate teacher, I felt that I had to memorize the lyrics of the songs as well - to really portray Maria Callas.”

To hear more about her 40-year career and the upcoming play, the Korea JoongAng Daily sat down with Yoon on Saturday for an interview. Here are some edited excerpts. 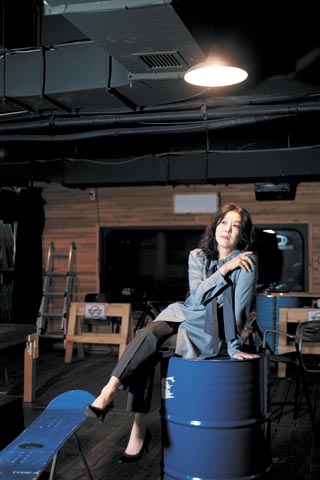 Q. What was the last 40 years of your career like?

A. I feel like I’ve experienced all four seasons of life during the past 40 years. There were times when I was all alone, feeling solitary and desolate like the falling autumn leaves. There were also times when I felt like a weak tree that’s getting hit by all the heartless storms and snow. But when I was on stage in front of the audience, I was as happy as a child on a summer beach with a spring breeze. Despite all that, I am still here and I want to give myself a pat on the back and I thank the people around me whom I’ve met through this career for helping me to be here.

You also have experience in the West End, co-producing several musicals including “Top Hat,” “Wonderful Town” and “Journey’s End.” What made you decide to go into producing musicals?

I was there for four years from 2011, working on five musicals. I enjoy any form of art that’s connected to theater. It seems like they are all different but whether it’s a musical, a play or an opera, they are all the same. It requires everyone involved - producers, directors and staff members - to work together to help actors do their best on stage. So I don’t mind what genre of performing arts I am working for in what position, as I decide whether I will join the team either as an actor, a producer or a staff member, depending on the work. The West End is the mecca of musicals and I wanted to see how great works get created there. I wanted to give myself that kind of discipline and an opportunity to study. For four years, I worked passionately and I decided to come back as I felt I’ve learned nearly everything that’s going on in there.

Your stage debut was in 1975 with “A Taste of Honey,” but it was “Agnes of God” that brought you stardom in 1983. I heard that while you were studying in New York in the early 1980s, you personally translated the English script into Korean and brought it to Seoul to stage it. Why did you want to bring that play to Seoul?

I went to New York in 1980 and back then, it wasn’t that common for Koreans to go abroad. I went there to study theater, but I felt like it was also my mission to search for great works there and see what we can learn from them. Although the language is different, I believe theater is a universal language, so I also wanted to search for great works that can be translated into Korean in order to introduce them to Korean audiences. When I encountered “Agnes of God,” I instantly knew that it had to be staged in Korea. I went right into translating it and after three years, when I finally saved up enough money to fly back home, I presented it to the Korean theater.

You have diverse experience studying and working abroad as a veteran stage actress and producer. In your opinion, how has Korean theater developed over the past 40 years? Is it going in the right direction?

It hasn’t been that long since we became an independent nation, and I believe we don’t realize the importance of arts. Korea was such a poor country and back then; we were so focused on becoming a wealthy nation. Everyone strived towards becoming wealthy, but this “wealth,” I think, inclined too much towards accumulating material wealth. We didn’t pay attention to being wealthy mentally. Being mentally wealthy is closely linked to performing arts.

For example, watching a great play is not just obtaining a literary knowledge but there’s art, music and above all, a living human being who is breathing together with the audience. Through these experiences, we think about the meaning of our life and have the opportunity to look back on ourselves. Although the stage is fiction, it is what connects us to the truth. In that sense, I believe Koreans’ understanding of arts is still lacking. But of course, that can’t happen all at once.

What can you tell us about “Master Class”?

I personally think Maria Callas is a legendary diva and we won’t be able to see anyone like her in the next 200 or 300 years. Of course there will be great sopranos who will have more beautiful voices than her. But we’ll never have someone like her. What differentiates her from other sopranos is that - and she also says this in the play - only a singer who has ever felt the pain of loss can really shed tears while she sings. I don’t like the word “acting.” Maria Callas said the same thing. I’m an actress, but we shouldn’t act. We should just feel and exist. And you know it’s not as easy as it sounds.

Maria Callas was a person who tried to be faithful to her feelings and to exist truthfully like her feelings. It’s what made her a great “actor” as a soprano singer on stage. Although this play deals with one soprano’s life, I believe anyone can substitute his or her life for her character. You will be able to learn what kind of belief and passion you have toward the career you’ve chosen. On top of that, although this is a play, you can hear great songs from opera singers in this play. That’s the charm.