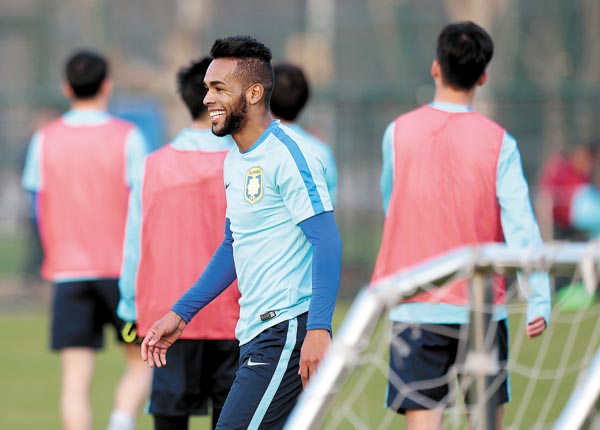 Alex Teixeira of Brazil smiles while training for Jiangsu Suning FC. Signing with the Suning for a transfer fee of 56 million dollars, Teixeira is one of the footballers targeted by big-spending Chinese clubs. [AP/NEWSIS]

Chinese teams are gradually spreading their wealth and influence throughout the football world.

Clubs in China splashed out a tremendous amount of money during the winter transfer period to sign big names such as Alex Teixeira and Ramires Santos do Nascimento of Brazil in preparation for the 2016 season and the Asian Champions League (AFL).

The Asian Football Confederation (AFC) made an announcement on Feb. 8 that 16 clubs from the Chinese Super League spent $284 million in January alone on transfer fees. The amount is about 2.7 times more than what the league spent the previous year and far more than any other pro leagues in Asia.

According to transfermarkt.com, a German-based website that provides European football information including transfer news, the cash the Chinese Super League spent even surpassed the spending of the big leagues in Europe, including the English Premier League, which spent about $272 million during the winter transfer window.

Italy’s Serie A spent $95 million while Bundesliga of Germany and Spanish La Liga each spent $53 and 35 million on transfer fees. None of the European leagues were able to match the Chinese spending power. Even Chinese League One, the second tier league in China, spent $52 million, almost as much as the Bundesliga.

With the skyrocketing salary being offered by Chinese clubs, the trend for international footballers heading to China has also changed. About three to four years ago, the Chinese Super League was perceived as the final destination for footballers who are well past their heydays. But now, players at the pinnacle of their careers, or those who have yet to reach the height of their career and have proven their worth at big clubs in Europe, are getting a call from the Chinese Super League.

Teixeira broke the Chinese transfer record when he inked a four-year contract with Jiangsu Suning FC for a transfer fee of $56 million. Suning outspent Liverpool by about $16 million to bring in Teixeira from Shakhtar Donetsk of the Ukrainian Premier League. This is more than the annual budget for K-League clubs, which is about $12 million on average. Suning currently stands at the top of the group ranking in the AFL after beating South Korea’s Jeonbuk Hyundai Motors 3 to 2 on Mar. 1.

As Xi Jinping continues with his vision to become the heavyweight in the global football, the uptrend of the Chinese football market is likely to stay on its course for a while. ESPN assessed that global football will see a power shift from Europe to China.

The expansion of Chinese football could be a warning for the K-League as the South Korean players and coaches who are considered as the top Asian footballers are being targeted by Chinese clubs and drawn away from local audiences. This was evident during the winter transfer season when Pohang Steelers striker Kim Seung-dae and Jeju United midfielder Yoon Bit-garam transferred to Yanbian Fude FC. In addition, Hong Myung-bo, the captain of the Korean national team that reached the semi-final of the 2002 World Cup and former Korean national team manager, was recruited by Hangzhou Greentown FC as manager. Kim Sang-ho, the former manager for South Korean U-20 national team, also assumed the managing post at the Chinese club Shanghai Shenxin FC.

Alternatively, some see the rise of the Chinese football market as an opportunity for South Korean football. For example, Jeokbuk received about $5 millions as a transfer fee when defensive midfielder Kim Kee-hee moved to Shanghai Greenland Shenhua FC.

“Since most of the players the Chinese clubs bring in from overseas are offensive players, many South Korean coaches and defensive players are highly sought after in the Chinese football market,” said Lee Jang-soo, former manager for Guangzhou Evergrande FC in the Chinese Super League. “As the K-League is undergoing financial difficulties, the Chinese capital could become lucrative monetary source for K-League teams.”