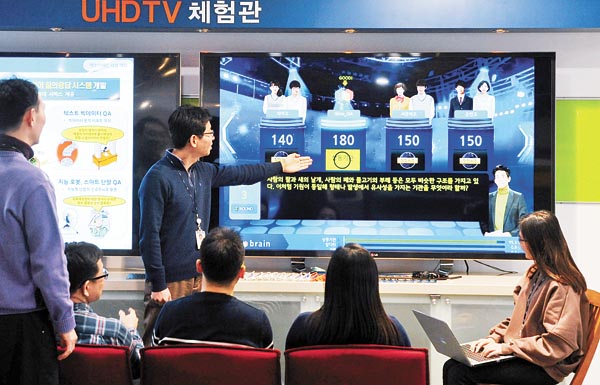 A host presides over a mock quiz show to test the capability of the artificial intelligence system Exobrain, which will compete with humans in October. [JOONGANG PHOTO]

In a silent studio, a virtual quiz show takes place to pit artificial intelligence against humans.

“The wing of a bat and human arms, or any upper limb of any mammal, have a similar arrangement of bones but perform different functions,” the host of the show said. “What is the term to describe such an organ system?”

In the mock contest, the artificial intelligence-based system advanced to the final round, answering a variety of questions.

The Exobrain project reflects Korea’s efforts to play catch-up with the rapid development of artificial intelligence, which is currently dominated by U.S. tech giants and research institutes.

Exobrain is the brainchild of the Electronics and Telecommunications Research Institute (ETRI), a state-run research institute, and the result of an ongoing artificial intelligence project funded by the government.

The institute is aiming to improve Exobrain’s ability to learn natural language and acquire knowledge by itself to beat IBM’s Watson.

“Exobrain can communicate in human languages and accumulate knowledge by itself,” said Kim Hyun-ki, a researcher at the knowledge mining division of ETRI. “We have set the goal of outperforming Watson, which won the U.S. quiz show ‘Jeopardy!’”

The government has invested 107 billion won ($89 million) in the Exobrain project.

Alongside the government, Korea’s corporate giants such as Samsung Electronics, LG Electronics, Naver and Kakao are venturing into the emerging artificial intelligence arena.

LG Electronics changed the name of its IT research center to Intelligence Research Center to add more weight to its AI-related studies.

Other IT companies have taken a step toward embracing artificial intelligence in their services.

Web portal and mobile messenger operators Naver and Kakao use the technology in loading search results based on each user’s preference and background.

As the buzzword “fintech” indicates, the finance sector has also adopted artificial intelligence technology in offering their financial services.

KEB Hana Bank launched its Cyber Private Banker service operated by its own robo-adviser earlier this month. It provides automated, algorithm-based portfolio management advice on its own without human financial planners.

The bank said that the robo-adviser is the first of its kind in the financial industry.

Some peer-to-peer lenders that directly connect lenders with borrowers have turned to the latest technology to measure credit ratings and borrowers’ payment reliability.

“Korea was not among the first movers in developing the technology, but we are quickly catching up with the market trend,” said Hwang Jong-seong, a researcher at the National Information Society Agency, a state-run IT research institute.

Despite the ongoing projects, Korea falls behind the front-runners.