Lee still sure of beating AlphaGo

Lee still sure of beating AlphaGo 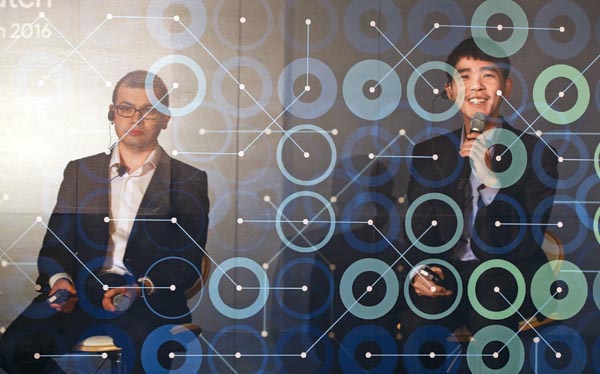 Lee Se-dol, a world champion of the ancient board game Go, said on Tuesday he is less confident of a clean sweep over Google DeepMind’s AlphaGo artificial intelligence (AI) computer program.

A day before the heavily-anticipated five-game match starts in Seoul, he said, “I am still confident [about winning in the match] because it seems hard for AI to catch up with human intuition or sense yet.

“But I realized after having AlphaGo’s algorithm explained that it may have acquired human intuition to some extent. I feel I need to get a little more nervous [about the match.] Now I think the chance that the results won’t be five to nil will be high.”

The 33-year-old Go legend, or baduk in Korean, said he was sure he would beat the computer system developed by U.K. start-up DeepMind in all five games. His downgraded assessment of his capacity indicates one of the world’s most powerful Go players has been somewhat overwhelmed by the potential of the man-made system that has improved itself through various stages of self-learning.

AlphaGo has accelerated its learning process ever since it defeated European Go champion Fan Hui in October last year.

The press conference in a hotel in central Seoul was attended by some 300 domestic and international media, with Chinese journalists in massive numbers. Demis Hassabis, DeepMind’s CEO and founder, and Eric Schmidt, former Google CEO and executive chairman of the parent company Alphabet, were also at the conference.

After giving a detailed presentation on the ancient game of Go and how the computer program works, Hassabis, a chess prodigy-turned-AI entrepreneur, emphasized the ramifications of the historic match rather than the outcome.

The five-day match is about showing “how flexible and powerful learning algorithms can be,” he said. “Although playing games is very fun and we are very excited about what’s going to happen in this match, we ultimately want to use this technology for more than just playing games. 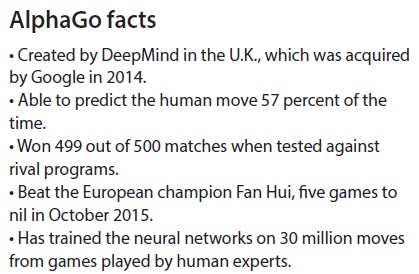 “DeepMind’s mission is to fundamentally solve intelligence and use it to make the world a better place by using it in many high-impact, real-world applications.”

He said AI applications could be used in health care, robotics such as household robots for the elderly, and smart operating systems.

Concerns that AI will take over the world will depend on how people use it, Hassabis said, but DeepMind also worries about related ethics and ways to benefit humans. Still, that kind of scenario is many decades away, the 39-year-old AI scientist believes.

“The winner here - no matter what happens - is humanity,” Schmidt said. “Humanity wins because advances in AI and machine learning will make each and every human being smarter and more capable and a better human being.”

Lee and AlphaGo will each be given a time limit of two hours, which means each match could last four to five hours. The winner of the tournaments, which will be broadcast live on YouTube, will receive a cash prize of $1 million.

Lee said the preparations for the match are different as he is playing against invisible software.

“I have never felt so strange like now even after playing so many games so far,” he said. “Since my counterpart is not going to be human, it’s different. It’s normally very important to read the mind of my opponent, but it’s impossible to do so in the upcoming match and I might feel like playing alone.”

He has been training himself to cope with the situation for one to two hours by imagining the actual game-playing scene in his mind.

Hassabis said the main advantage of AlphaGo against humans is that it will never get tired and scared because it is a computer. Regarding its weaknesses, he said, “We need to see if there is any weakness we don’t know about. Maybe there’s something our systems don’t do. We will see how the system copes with a genius like Lee.”

AlphaGo won’t evolve over the course of the five games, as the algorithm has to learn things through training and learning from just a few games does not involve very much data. “The system needs several thousand games [to improve],” he said.

On the outcome of the game, the Go guru appeared composed about the worst-case scenario of losing.

“I may lose, but since the computer won’t be playing the game with the understanding of the beauty of Go and human beings, the value of Go will remain intact,” he said.

“But we can’t avoid the current of the times. Some day, at least not for now, artificial intelligence will eventually defeat human Go players. That doesn’t mean the value of Go will go away.”