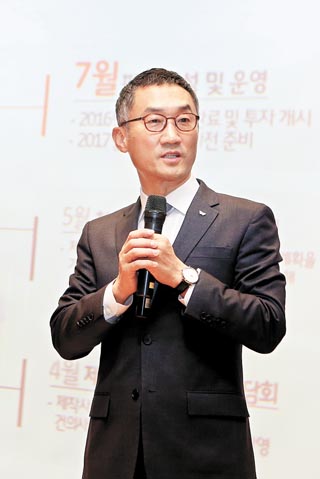 SK Broadband, a wholly-owned subsidiary of SK Telecom that is awaiting approval of its merger with CJ HelloVision, plans to raise 320 billion won ($265 million) this year to invest in content development and production when the deal with the top cable TV network gets the green light.

The combined unit will finance 150 billion won of the 320 billion won, while outside investment and venture capitalists will be sought for the remaining 170 billion won.

The funding will be the largest investment in content made by a company. It signals that the SK affiliate intends to shift its business focus toward original programming and a media platform beyond its core area of Internet broadband and Internet protocol television services.

The company has made investments in the content business, but the amount has not exceeded 50 billion won in the past five years.

“With the funding, we will be focused on producing quality entertainment series like ‘House of Cards’ to offer new, distinguished content for viewers,” Lee said.

If the regulator gives a green light on the deal, the funding will be executed in July, Lee said.

The company says 120 billion won of the funding will go toward original programming, with 60 billion won allocated to develop tech-driven content based on virtual reality.

Another 40 billion won will be spent on media projects targeting the global audience and 100 billion won on funding high-tech start-ups.

In response to criticism about the lack of novel storylines in dramas, the CEO said that the TV series developed with the funding will be different from “typical Korean dramas”.

“We have a long way to go to form a mutually beneficial system for production companies and platform operators,” said Song Byung-joon, a vice chairman of the Corea Drama Production Association.

“But I think the efforts by SK Broadband will help improve the quality of media content and create more jobs in small and medium-size production companies.”

Despite the grand plan outlined by the company, the fate of the deal still hangs in the balance.

While the Ministry of Science, ICT and Future Planning, the Korea Communications Commission and the Fair Trade Commission are reviewing the proposal, rival telecom companies KT and LG U+ joined hands to oppose SK Telecom’s acquisition of CJ HelloVision.

The two companies issued a joint statement saying the investment plan is short of justifying the acquisition.

“The combination of the largest cable TV service provider and the top telecommunications operator will result in a monopoly and unfair business practices,” the statement said.